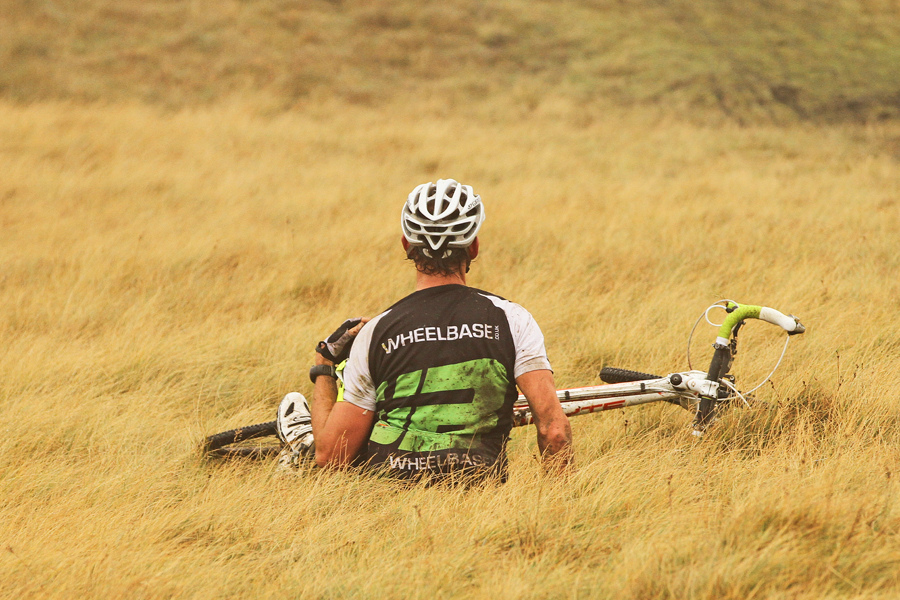 I had a bad sleep last night.  My clavicle broken into two pieces is reasonably easy to get comfortable when I’m upright and in a sling, but lying in bed it’s hard to.  But that’s what this is about, to an extent… getting comfort and keeping still when you get there.

My 14th attempt at the Three Peaks Cyclocross wasn’t a very good one on the whole.  It was to be a vintage year with my cousins Mark & Adrian riding for the first time as well as my brother Phil fairly fresh from six weeks in plaster with a broken leg.  But it wasn’t quite the vintage I’d hoped for.  A finish time of four hours and ten minutes may be nice to aim at for some but it was a personal worst by a long way, but somehow it’s not all bad.  This race is my Christmas and Birthdays all rolled into one.  I absolutely love it and live it every day of the year, and I can’t fall out of love with it so easily, after a little tiff.

The day’s racing  didn’t go brilliantly but it rarely does and that’s just the 3 peaks.  My engine just didn’t get revved up very well until late in the first climb of Ingleborough.  I didn’t panic – just took it in my stride and gradually made my way through the field from about 60th place at the foot of Simon Fell.  I know the race too well to worry about it all so early on – there’s a long way to go and you have good patches and bad patches all day.

So it took until the soggy and boggy descent of Ingleborough to get me as near to the front to start getting that bit of comfort.  I rode onto the lower slope of Whernside after some clean bike changes from Tolly and Katie with my spirits a bit lifted, and picked my way up to 22nd by the summit of the second peak.   Still some way behind my previous bests but it was a tough day on the descents and I was riding them well, so I wasn’t panicked.  I was hoping for about 15th by now and that would have done fine.

It all went tits up though as soon as the Whernside descent started. A front tyre blowout about 90 seconds into the descent from Whernside made for a hard ride / run down. I pushed it hard at first but soon realised I was relinquishing valuable control on a flat front tye (thankfully well glued on by Alan) so a lot of unscheduled dismounting and remounting took quite a bit out of me – in terms of time, physical effort, and fundamental morale.  It was hard coming down to Ribblehead knowing that my efforts (and planning!) in chugging hard up Whernside had been more than undone – I’l lost a load of places and energy.

The road down to Horton was cramp-strewn as a result.  I shared a bottle and some psychological energy with Stef Macina but in my heart I knew I’d fired all my best shots and Penyghent was going to be damage limitation.  The rise to the summit went okay but it was painfully slow on thighs and calf muscles cramping from the Whernside chaos. I was buoyed by the turn at the top and looking forward to nabbing a few places back on the manic descent and my Whyte bike – so made for such descents.

… but it wasn’t to be.  Only a couple of hundred yards into the descent my front wheel hit something very hard beneath the boggy grass and I carried on.  The crack on my left shoulder as I hit a rock on landing was familiar and decisive and although I tried to get on the bike again straight away I soon knew what was what.  Tucking my arm neatly into my zip of my Wheelbase jersey as a makeshift sling, I walked and coasted back town Penyghent to Horton in a slight haze of disbelief, disappointment and adrenaline. I’m not sure if it was the energy products I’d imbibed during the last 3 hrs but I felt fairly okay, pain-wise. I rode back along the road from Horton with one arm on the bike.  This was no act of stoicison or machismo – it was just a practical logistical thing – I had to get back to the finish because that’s where everyone was.

I felt awful seeing Katie there.  She suffers this race as much as I live it.  It’s physically and mentally a torturous day for her supporting me as a helper but also tolerating my absorption with the race for months before.  To be waiting at Helwith Bridge knowing I was very late must have been dreadful for her and I felt so selfish.  Taking me to A&E last night must have been the least of her worries… there’s school / nursery runs etc to think about for the next few weeks – the basic things that one-handed people are bad at.  Serious day to day things.  Not bike things.  They’ll follow later.

Thanks Katie and Tolly for helping in the first line support.  Thanks to John Rawnsley and the team for making it another brilliant event. Thanks to Bowland & Pendle Mountain Rescue for patching me up in a sling after the race. Thanks to the scores of people – both riders and passers by who offered help and sympathy as I trudged down Penyghent.  Thanks to mum and to Katie’s mum for some splendid food and stomach support before, during and after. Thanks to every well-wisher on Twitter, SMS, Facebook, Email and phone since the race finished.  I’m fine.  I have to buckle down for some recovery and make sure that my family have recovered as well as me.  Then there’s the fracture clinic and specialist to see.

The photos below have been taken from the excellent people below: