My friend Richard, a friend since the age of about 4, with whom I have been in a band on and off since I was 18, is a Studio Manager at the BBC. Richard had mentioned a few months ago that I would be welcome to come along and watch one of the sessions on BBC 6music whenever he was on his shift for Marc Riley‘s program. Last night, Mogwai were playing, and this presented a great opportunity to see Richard at work as well as a fascinating band who I’ve admired for a long time.

It was a truly enthralling evening from start to finish. I arrived at the Media city studios at about six and the sound checking that just about finished. I walked in to the studio to be very warmly greeted by Mogwai and Marc, which was strangely familiar for some reason. Meeting at DJ Is an unnerving experience because their voice is simply very familiar to you. When you say hello in the flesh, they seem like they are already part of your network. Marc presented something extra here, probably very predictably, by being incredibly warm and genuine. There was no pretension, not even the slightest hint of celebrity or any of that nonsense. Just a simple, warm chap (who just happened to once play bass in The Fall). The “music” day was blighted by the death of Kevin Ayers at 68, which is the type of thing make anyone feel humble anyway.

For people who know anything about a band like Mogwai, the feeling was similarly remarkable in its ‘down to earth’ factor. Five people who play instruments. No pretension, no divas, just very nice to see people at work making such fascinating and polished tunes. Their album out on Saturday is a soundtrack to Les Revenants – a French film, and they lovingly played three tracks from it. 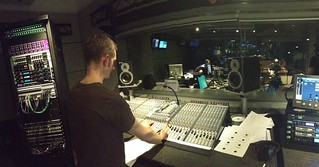 Aside from all that, seeing Richard at work was pretty enthralling for me. I’ve had an interest in sound engineering, and the qualities of the audio experience since I got my first computer and started to make music that way. Seeing somebody handle a live band playing in a small room in front of a large national audience with such calmness and serenity was wonderful. It certainly took a lot of qualities that I do not possess. Multitasking is a large understatement. But very calm. Incredibly, scarily calm.

And so, inevitably, after tidying away a few leads and mic stands, we went to the pub and had a couple of pints. It’s really should have been more, but it was -2°C outside, and I had to cycle home 17 miles. I’m glad I didn’t have the third point. But it was really great to see Richard. An evening of live music, cycling and beer, then. Pinching myself. Thanks Rich.