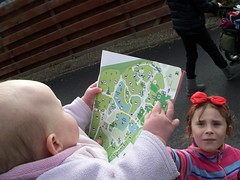 Today was a Baker day at Lily’s school so we took full advantage of the quietness by going off to Blackpool Zoo. Unlike Mr and Mrs Ramsbottom, who went there with young Albert, their son, we returned en masse, and a very happy family after a really great day out.

Factor one was the weather – a real ‘steal’ – not expecting it at all but it was clear and sunny almost all afternoon there. The Zoo itself was a great size; I’ve found London and Chester Zoos to be a bit sprawling, but we managed to see as much a variety of animals in a smaller space without the animals feeling cramped. Okay, there were no hippos or rhinos, but the relative space they take up is not really needed. They’re pretty dull when all’s said and done.

Highlights for me were

The lowlight for the day was driving on to catch Blackpool Illuminations as the sun went down. The lights had been switched off the evening before for the year (!!). Will have to get to the illuminations next year though.

See the photos here on Flick or here as a slideshow.