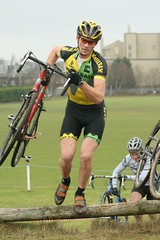 Ever the one to blow my own trumpet (if only I could reach it), I thought it’s worth a cyclo-cross update. I’ve now won the North West cyclo cross league with still two rounds to go. Nice feeling. Warm glow, etc. But…. the icing on the cake came on Sunday 18th December, on a freeeeeeezing day at Beacon Hill park a few miles from Wigan when I managed my first victory of the season. Hooraaaaah! There was a slightly smaller field (46 signed on at the start) but I made it convincing, clearing off straight from the start and extending my lead on each of the seven laps of the woodland / hillside circuit. The slight down side was that it was so cold that there was a tiny gathering of spectators to see me come over the line in first place, but that’s not a big deal in the grand scheme of things. Piccie courtesy of Ian McVety, from the previous week’s race at Ulverston.. (where I was second). Barrie Clarke struggles in the background…!