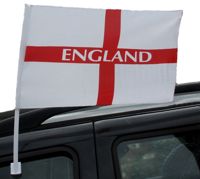 RANT: The world cup is nearly upon us and an ever-increasing number of drivers decide that it’s time to stop sitting around and really help the England football team over in Germany by flying small flags on their cars in England. There’s a thin line here – I don’t want to discourage patriotism. The problem is; it isn’t partriotism. I wonder how many of these people know when St George’s day is (or indeed who he was). There was no flag-flying going on when the English team went off to Melbourne for the Commonwealth games this spring.

What’s funnier is that the whole concept of a flag is that it’s a visual symbol recognisable by its patterns to denote a particular country. But that’s not enough for the thickies… they need the word “England” written on – just to be safe in case someone thinks the George cross means Brazil , Paraguay or something. Even the concept that flag drag will boost fuel costs seems to make no impact on the dim whits who fly these annotated flags from their cars. I wonder how many of these patriots think the price of fuel is astronomical in this country?

But my real rant is about how this links to football, and why I like to play it but hate to watch it. Every summer, I love to watch the awesome challenge of the Tour de France, the tennis at Wimbledon, some cracking Athletics meetings and several other sports. But there’s something else in football. Many sports have their passionate fans, but none are so partisan. I don’t really mind whether Lance Armstrong or Ivan Basso win a stage or the overall… it’s how it’s done that makes it entertaining. The England fans I saw watching the last world cup in the pubs of this country didn’t care how it was done – didn’t even care whether England had played fairly – they just wanted them to win. Panache not required. What a dull outloook on life. Rant over.