Remembered to put my camera in my kit bag this year – second time running!

Some snaps of the goings-on before and after the race in Helwith Bridge here, including Nick’s very light frame 😉

Finally got my hands on a nice little article about Cyclocross from Singletrack magazine that they published in February this year, with a quote from me in (I didn’t write the ‘Top 10 UK racer’ bit by my name!!)

If you’re from Singletrack Magazine and are reading this, yes – I’m probably breaking some copyright rules here. But the link was free, eh? Here’s another.

My previous post on the Three Peaks Cyclocross blog seemed to make out that it was not about the bike or the gear, but more about the training and fitness. I stand by this in general, but there’s a middle-ground – it’s about all-round readiness.

I’ve been training ‘late’ this year – deliberately (so as not to go insane) and it’s all coming together now really – I got myself a decent base fitness that (only really this week) has turned into what I’d call ‘training’. By training I mean doing things unenjoyable and seemingly unrewarding that hurt and in which time stands still. Hill reps, sprint reps… it’s not really enjoying the outdoors (or indoors, on the flipping turbo flipping trainer), but it serves a purpose I suppose.

With this ‘switch’ to training I’m reminded of two things:

1. There’s no training like racing
If you’re in need of pushing yourself really hard, then you can never do that as well as in a race. Whilst I’ve managed to keep myself going with a few crits on the roads this summer, I haven’t raced since the first week of August. That’s nagging at me. This weekend at the Grizedale Mountain bike Challenge I’ll get that racing feeling again for about 3 hours. Whilst it’s technically not a ‘race’ – but simply riding your bike against hundreds of other people as fast as you can over the same course (!) – it’ll still give me that welcome indicator of what it feels like to really push hard one and two hours into something. You just can’t do that in training (or at least I can’t).

2. The fun is in the result, not the process.
I’m not alone in not enjoying hill reps – if you enjoy them, you’re a mentalist – face it. However, a quote that Chris Boardman rolled out a few times during his successful cycling days always comes to mind… something about getting satisfaction from something but not enjoying it. The satisfaction comes from knowing I’m training my weaknesses. There’s little else to train – if you train your strengths, you’re not really getting better. 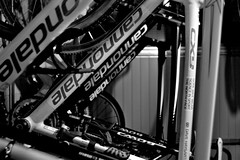 Back to my initial thoughts… about the balance between ‘gear’ and training. It’s all got to come under the same roof or ‘readiness’ or ‘preparation’. Two lovely new Cannondale cyclocross frames came into my possession last week thanks to the best bike shop in the world and I take almost as much satisfaction from seeing those built up and sitting in the garage ready for action as I do riding them. The special care that goes into getting the bike(s) ready for the 3 peaks is part of the process. Training, building, tweaking, peaking. It’s the readiness thing. 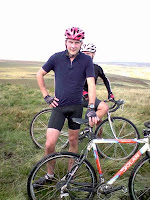 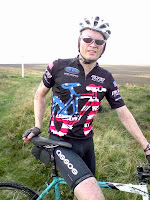 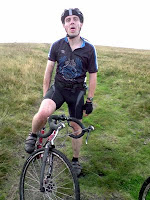 We’ve had a bit of a gathering in Helmshore, Lancs (where I live) the last couple of Friday lunchtimes. It’s amazing how many people who ride the three peaks are within a few miles of here and it made sense to get a few of them together to share the pain of my fairly regular ‘simulation sessions’.

I’ve got a ‘course’ of about 1.3 miles that is a fairly good simulator of Ingleborough – the un-runnable grassy climb, peaty unridable jog, fast-ish but tricky grassy descent – it’s not bad and certainly helps technique.

So Mark Solomon (first timer this year), Matthew Pixton and Carl Nelson (multiple finishers!), Alan Dorrington (Cyclocross Connoisseur and former top ten in the ‘Peaks) and Jason Miles (long distance looney – clue’s in the surname, and finished first ‘peaks last year) and I have all met up over the last couple of Fridays and hammered ourselves up and over Bull Hill a few times.

It’s bringing a new dimension to it to me – subtly making the social aspect of this special race spread itself that little bit further.

Links to some of these Titans of Cyclocrossery:
Jason Miles
Alan Dorrington

First timer Steve Riley is under no illusions about the venture he’s setting out on later this September… even though he’s given himself the luxury of things like gears.

So I was thinking why on earth would anyone want to read about an ordinary bloke trying an extraordinary event? Of course, the answer’s in the question. I’m an ordinary bloke, one that makes too much noise on the internet, and the Three Peaks is clearly an extraordinary event. So clearly bonkers, that no race in the country is quite like it. Heck, the world maybe, I don’t know….

Despite being at this game since 1995, I still can’t help but want to tweak with gear in the hope that there might be some ‘holy grail’ of equipment / setup that I’ve missed out on.

I’ve gleaned lots of valuable knowledge in the numerous events I’ve ridden – like anyone who does the race a few times. The early ones were more experimental and gradually you work your way into knowing what works for you. The problem this year is that I seemed to have forgotten that and started reinventing my particular three peaks wheel. 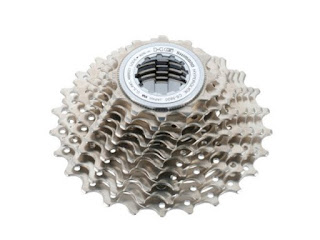 This time, it was the gears. I’ve acquired a Mountain bike this year after a gap from MTBs for a few years. It goes well and I love the setup. So being a three peaks junkie I inevitably started to ask myself if there was anything I could learn from this year’s MTB riding. Mistake number 1… I’ll explain why:

Having decided that – being in the lucky position of having three cross bikes – I was going to radically adapt my ‘Ingleborough and Penyghent’ bike. Given how hard the Penyghent climb is after a good dowsing in Ingleborough and Whernside, I seem to struggle on gearing, not being able to turn over the rather small 34-27 bottom gear I’ve used there for the last two editions of the race. So the ‘logic’ is to build up a bike with an easier gear. Given that I’m on 10 speed – and hence limited to 27 on the back – my only real option was to look at a smaller front chainring. Out comes the MTB triple chainset. I was starting to get quite chuffed about my choice of gears… it made sense… on paper. 28-27 would really help in those dire moments on Penyghent… wouldn’t it?

Well… no, actually. You see, I’ve been here before. If there was a medal for riding as much of the course as possible, maybe I’d look into gears as the solution, but yesterday on a long, hard, off road day out, experimenting with my new luxurious gear, it came back to me very quickly. Having a smaller gear just makes you travel slower. The three peaks is a race. Damn. I recalled Penyghent last year, and also recalled a battle with Philip Hinchliffe who eventually finished one place ahead of me. We hit the start of Penyghent together and I was envious of his triple chainset – but by the summit – despite his riding where I could only walk – we crested within 20 seconds of each other. That’s just it really – his more ride-able gear took him up the hill no faster than my walk / jog / push / carry approach.

That’s the hardest bit about coming to terms with this equipment experimentation – I know in my heart of hearts that the training is what’s required. That requires time – not money or technical know-how. Hey ho. The bike now has it’s standard gear on and it’s back to the training. Until the next bright idea.

Big chainrings, slippy descents and the steps over a fence here are just fantastic!!

To the team of people who went up Simon Fell on Saturday to erect the improved stile at ‘that’ nasty bottleneck, we salute you.

We’ll even forgive you for having a cyclocross bike on the illegal training ground, seeing as JR was looking on. 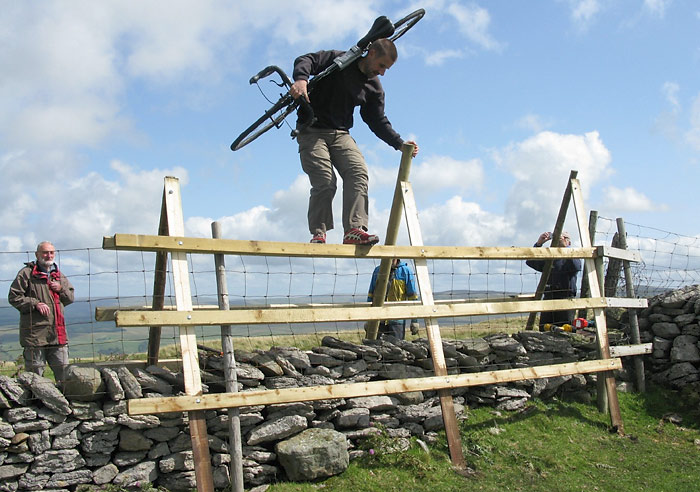 A good thorough article (found through the 3 peaks forum) here – click on the image then the magnifying glass to the top right to view to a readable level.

Particularly like the notion that anyone organising a race like the Three Peaks in Belgium would have been ‘put in prison’.

Finally someone’s digging out their old VHS cyclocross videos and sticking them on youtube.

… or if it’s that Martin Eadon effect you’re after, check out this wonderful pop video…

From my own sketchy memory – this is the first year that the event will have no juniors ever – if the current ‘latest’ list of accepted riders is anything to go by. This is obviously a major shame for a race that seems to boast such enthusiasm.

It’s obviously a great shame – maybe the race is shrouded a bit too much in this legend of harshness, danger and difficulty – it puts off today’s couch potatoes. Maybe we should bring out a Nintendo Wii version of the Three Peaks Cyclocross that youngsters could safely take part in without going too far outside of their comfort zone.

Rich from qwertyphoto has just told me he’s uploaded this batch of photos from the descent of Whernside from his point-and-shoot camera. Still a nice collection capturing the good, the bad and the very tired looking.

I’ve just discovered these on an old HDD today. Taken with a point and shoot, so not that great quality. Looking forward to this years race