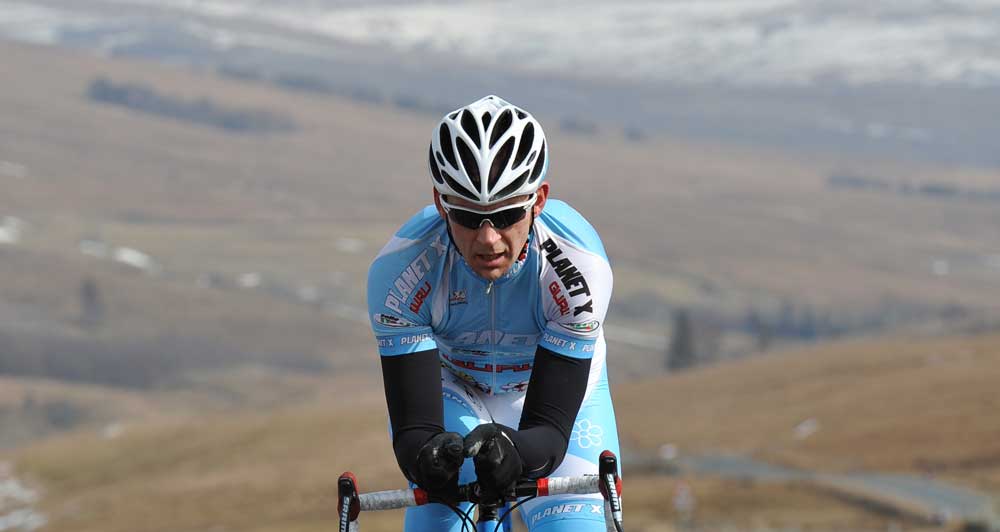 It’s almost exactly ten years since my last time trial. I had ups and downs in my against-the-clock racing between the ages of 17 and 33, but on an April Sunday in 2003, I rode the local Hilly Time Trial (the now defunct Circuit of Holcombe) and didn’t realise quite how long I’d be hanging my time trialling wheels for.

A lot have changed in that ten years; fairly obviously, I guess. Now ten-year-old Lily was literally a babe in arms then. Cycling-wise, I’ve also had a bit of a late thirties flourish in cyclo-cross, in my own relative terms, and ten full years off time trialling I must admit I’d started to get a wee bit intrigued about how it all would feel again to ride against the clock…. so I entered a race that had always taken my fancy – for several years – the Circuit of the Dales. Reasonably steeped in history (since about 1980), it’s a tough course and an event that takes place within spitting distance of Kirkby Lonsdale (where mum lives) and Ingleton (where Katie’s parents live). It’s also, dare I say it, within eye shot of three rather special ‘peaks’ of the Yorkshire Dales. If I was going to time trial again, it may as well be a special one.

Surprise, surprise, there was little fun to be had. Despite the spring finally turning up just in time and that nagging easterly wind finally taking a break, even in chilly spring sun (1°C at the start) it still felt pretty heavy weather. A ‘big push on the back’ start at the top end of Ingleton gives you such flattery for five miles or so to Tunstall. It’s downhill, and I think I even sensed a tailwind… but those things never last. The psychological damage kicked in at Greta Bridge, where you start climbing the Lune Valley. For ages. The roads feel like ‘I should be doing 25mph’ but the actually are ‘I’m struggling to do 21mph’ roads. Luckily, a few rises and falls make this bearable, and changes in rhythm are welcome in this sort of a race (well, for me).

It’s a real relief to start the first ‘real’ climb, from Sedbergh over Garsdale Head. Not that I’m a climber (especially a stone over my September weight) but it’s nice to have something to get your teeth into other than energy-sapping should-try-harder drags and false flats. Though the climb lasted 29 minutes, it was a reasonably ‘fast’ climb (I rode the 800 feet of climbing and 9.8 miles at an average of 18.9mph), but it was a climb. You knew where you stood. You had to ride uphill. That was less psychological torture than the Lune Valley.

The uppy downy descent to Hawes is basically one long anticipation of what’s to come. With only 1,000 feet of climbing over 6 miles, the drag over to Ingleton is rarely steep, but tired legs make it that much worse. I rode a lot with a heart rate monitor in my former time trialling days in the 90s, abd today it was of really good use. It’s so hard to go too hard for a bit (then pay) or lose focus and let the effort drop, 2 and a bit hours into racing flat out, but riding on your HRMs guide is really useful on drags like that.

It was nice to see a few people out chivvying me along… Phil, Angus and Mum predictably chanting ‘Good Boy’ near Casterton and Middleton, and Katie with Jean and the girls at Ribblehead, but strangely, on an innocuous streth of hell, almost 1,400 feet up, it was warm to get a shout from photographer Adrian Nicholls of SportSunday – out getting a few photos in a remote spot. That was near the crest of the final climb (not to be sniffed at and higher than any Lakeland pass!) and an ‘I’ve made it’ moment – with only 6 or so miles of mainly downhill left.

So is there anything I learned? Would I do it again? Am I going back to being a tester?

Well, no, in a word. I knew it was going to be very tough. It was very tough. My finishing place – about 39th from 140 was nothing to write home about. I know how to improve that and frankly aren’t that bothered about the dedication it needs. I’d much rather relish putting training into something I could raise my arms aloft for. I’m a tart. I’m driven by ‘event’, by ‘occasion’, and by the sounds of spectators, in a strange way. Time trialling doesn’t provide any of that. That’s not a criticism of time trialling – it’s a criticism of me, and what makes me tick. Put another way, I don’t have the legs for it….! But, crikey, what a stunning part of the world to suffer in. Give me that over a dual carriageway and a fast time any day.

Thanks to my brother Phil, Nephew Angus, and to Ady Nicholls and his ace people at SportSunday for the photos.

GPS Here on Strava: Circuit of the Dales

It’s great catching up with old friends. Sometimes it goes far too long between seeing friends. It’s hard enough to co-ordinate good time together with people who live a few miles down the road in these busy days of raising children, let alone people who emigrate to Vancouver. END_OF_DOCUMENT_TOKEN_TO_BE_REPLACED