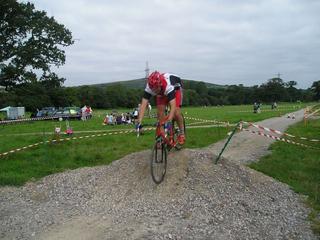 My brother did his first cyclo-cross of the season on Saunday down in Ivybridge, near Plymouth. Nice piccie of him here. We’re revving up for the 44th annual Three Peaks Cyclo-Cross on Sunday 25th Sept – the thought of which is keeping us both regular. I’ve competed in nine Three Peaks ‘crosses, and completed eight (snapped my saddle off one year and finishing was out of the question!). Best position was last year – 20th out of 256. Hoping to get inside the top 20 this year again but it’s a tall order. I’ve deliberately upped my running this year and lost quite a bit of weight – essentially all for this one race – so a lot rests on what happens on Sunday. It’s impossibly hard for me to relate how one race can preoccupy me so much more than other races, so I always spend this part of September in utter infatuation.. .my mind’s never off it for more than a few minutes – both awake and asleep. Saddo.