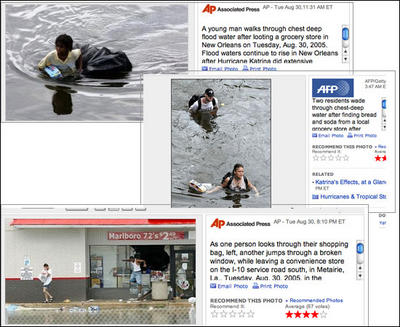 Two photographs of New Orleans residents wading through chest-deep water unleashed a wave of chatter among bloggers Wednesday about whether black people are being treated unfairly in media coverage of post-hurricane looting.

One of the images, shot by photographer Dave Martin for the Associated Press (and publi9shed on Yahoo news on Tuesday 30th Aug), shows a young black man wading through chest-deep waters after “looting” a grocery store, according to the caption. The young man appears to have a case of Pepsi under one arm and a full garbage bag in tow. In the other, similar shot, taken by photographer Chris Graythen for AFP/Getty Images, a white man and a light-skinned woman are shown wading through chest-deep water after “finding” goods including bread and soda, according to the caption, in a local grocery store.