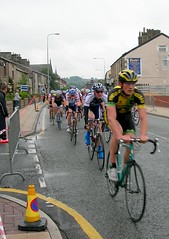 First race on the road this year (if you don’t count a duathlon), the supporting 3rd cat and Juniors’ race for the National championships at Horwich (nr Bolton). I was disappointed a bit – I’ve got high expectations of myself – but I finished in the middle of the whittled-down bunch on a wet but fast course. Probably about 20th place – but the results will confirm that. Sprint finishes in bike races are a bit out of my territory and I was looking for a break to get into instead, but it was too fast a course with easy corners – so there wasn’t much jumping about into and out of tight bends (luckily – the roads were wet!).

Having made my excuses, I must say that I just am not up to that speed of racing yet (26.5mph) after commuting and riding steady since the last cyclo-cross race in January. I’ll get there – as I ride the races at Colne, Clitheroe and Rochdale later in the summer, but I’m going to have to ride more strongly as well as intelligently if I’m going to repeat my podium place at Colne in 2005.

The races themselves were well put together (by Horwich CC) and it’s always much more exciting racing in front of a good crowd. British Cycling’s report here.