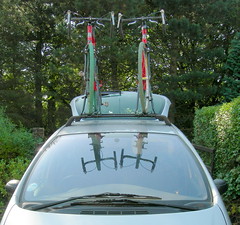 Ahhh – what a lovely feeling – the nights start getting longer, the mornings are dewey, and two bikes are on top of the car – we’re heading for a small parkland on the edge of a housing estate in Northwich, Cheshire, for the first race in this year’s North West Cyclo Cross series.

I won the league last year (ten races count) but won’t be going for the NW league this year because I’ve got to ride a few more national series races for Wheelbase and Gore Cycle Wear – my sponsors.

So it was a reassuring start to the season when I rode well and won the race. I should have done – on paper – because of who else was (or wasn’t) racing – but still – it’s a really satisfying feeling. Nicer still was the weather – although it was too hot for cyclo-cross racing (you don’t travel much faster than 20mph at the most so you don’t cool down with the breeze as much) it was just right for Katie and Lily to come and watch me – and cheer me on. I’ve only won two ‘cross races before this one – but this was the most special because it was the first with family watching.