Every year, on the first weekend of March, I spend a couple of days and one night with my brother Phil, my cousin Adrian, and six or seven other people (Adrian’s old College friends, colleagues mainly). The intention of the trip is to go somewhere mountainous (not just ‘hilly’ or ‘scenic’ – that’d never do), and pretend to ourselves that we are Titans of the mountains who’ve just decided to do a simple walk instead of our usual E6 grade climbs.

Geared up in stuff which far surpasses our ability to warrant it (e.g., my new Garmin forerunner, see right), we have a great day out, tired but splendid evening in a good pub, then a shorter walk on the Sunday, (shorter under the guise of needing to get home that day, but actually shorter because we’re all old and tired).

This year’s trip was a small break from recent tradition of visiting Snowdonia, and instead Adrian chose Wasdale. It was a good choice, leading to much self-congratulation. The snow of 2006 wasn’t about (apart from a few dots on the Summit of Scafell), but we were rewarded with fairly quiet routes (especially Sunday’s stroll up Yewbarrow), and some atmospheric weather.

Good banter is a given when you put eight men together who see each other annually, and it was really a whole lot of fun from start to finish. Some of the highlights included finding a pair of pretty decent Levi 501s at an altitude of about 2,500 feet and a long way from anywhere you’d really need a pair of 501s. John Shepherd has his theory as to how they got there. In any case, I’ll be trying to reunite them with their owner (as well as getting the full story). If not, they#’ll probably go for a tenner on eBay. 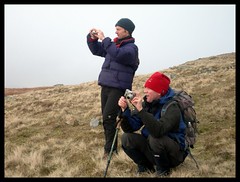 Lots of photographing things also goes hand in hand with these trips. That and spending a good 50% of each day discussing how best to photograph things.

Phil uses these trips to become a life coach, and one output of the weekend was to get commitments from Steve Riley to ride the 2007 Three Peaks Cyclocross and for Simon Fox to do the Bob Graham round this summer. And they weren’t even in the pub when this was nailed down. Also discussed at various points of the trip was how most or all of us will be a good deal lighter and fitter next year. I think this was agreed last year too, come to think of it, but this must have been deferred by a year at some meeting I missed.

Thanks, Adrian, for a great time, and I very much look forward to next year. Photos on Flickr here if you want to see them.