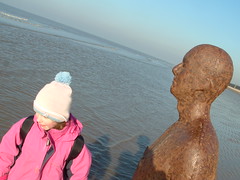 Taking advantage of the pretty much unprecedented February clear spell, I took full advantage of a day’s leave booked to spend with Lily. Katie’s half term doesn’t coincide with Lily’s which is a bit crap, but we had such a stonking day together – was really good fun.

We set off bright and early to head over to look at the Anthony Gormley installation on Crosby Sands, between Southport and Liverpool. The vista was so impressive in these clear, crisp conditions; it was inspirational. We returned to the car with one sandy, knackered dog, and had our butties (along with some cheeky scrounging avians, see right)

, then were due to head to the museum in Manchester for the afternoon, when we passed Knowsley Safari Park. The sun was out, it was relatively quiet, and the opportunity just begged us. Some photos here (a mix of proper camera and phone stuff). Ace times.