My first fell race for ages today was a load of fun in many ways, but also a bit of a release. I haven’t had any competitive outings in any form for three months almost to the day, so whilst I had a lot of mind-rest, I also focused a bit more on today’s Kinder Downfall race a lot more than I’d have liked to. Call it being over competitive, but each time I went out running, I generally thought about being in good shape and giving myself the best shot at the race today.

In the end, it was more a case of ‘business as usual’, with a respectable finish and a slight improvement on my time of last year. In many ways, I just feel relieved that I didn’t let myself down in any way. With a sleet-and-snow induced reduction in the number of starters, my top ten result was nothing to get really excited about, although I’ll openly say I felt great and ran a pretty intelligent pace. Unlike in
last year’s race, whew I ran out of steam (big time) in the last mile or so on the flat, I actually made inroads on the run-in this year, dropping a competitor and making big gains on the one in front. However, after all was done, I just finished in a respectable 12th position and unharmed. If I’ve reached my running peak at 38, I’ll be happy with my lot, to be honest.

Hat’s off to friend Steve Riley on his first fell race of manly distance – his fitness proved a great foundation for a remarkably good first outing and we’ll be seeing more of him in the good end of the results I reckon. 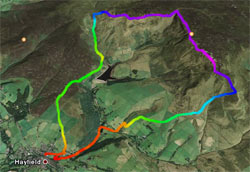 Google Earth track of the course in stunning detail here.