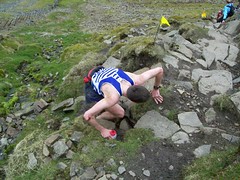 I had a cracking day out on Saturday with Elvis. Katie dropped us off at Ribblehead to watch the Three Peaks race which I wasn’t competing in again this year, and the build-up to the leaders of the 740 racers coming through led to an electric atmosphere. When the first few leaders had come through, we ran on to the Hill Inn, then followed the course up to the summit of Ingleborough (Google Earth track here).

My main reason for being there was to give moral and fuel support to Rob Jebb who cycles with me in Team Wheelbase. Rob had won the race for the last three years, but this year’s ‘international’ status of the race (the World Long Distance Mountain Running Challenge for 2008) meant a larger field, more prize money, and more nervy runners! In the end, after a super-fast start to the 24 mile race, Rob finished fourth.

When I helped him on Ingleborough, with a long descent to the finish, I offered him encouragement, knowing that on a long race like that, there was potential to close the time gap:

Dave: “Still lots of time to catch them yet Rob. How are you feeling?”
Rob: “Fucked.”

I ran down to Ingleton after that, dropping my camera twice on the way, but I somehow got away with it. Elvis didn’t like standing about watching runners much, although he did take the opportunity to beg sarnies from spectators whenever the chance arose.