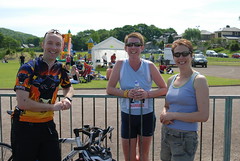 With the new addition to family Haygarth being such a big thing in the June calendar (or the May one, as things turned out), I decided to give the local Rossendale Triathlon a miss this year. Instead, I continued and indeed developed my 2008 habit of becoming a sports spectator, and went along with the camera to get a few snaps of mates Carl and Cathy Nelson doing a team effort in the local sprint triathlon.

They did very well and everyone seemed to enjoy the event. Lily and I especially enjoyed the trip out on the trailer bike – she covered 13 miles and has perfected the art of seeming to be pedalling all the time (or at least, every time I look round!). Funniest bit of the day for me personally was when we were making out way round part of the course and came up behind one of the less committed entrants – Lily’s pedalling suddenly kicked hard from behind as she scented the quarry, and we had to overtake the poor bloke. Quite what he thought when he saw the five year old’s determination as she rode past, I don’t know, but I suspect he felt like jacking in there and then. It made Lily’s day though… little minx.