We got a double whammy this year for the first time – Lily’s nativity plays have been a source of parental pride for the last few years but this year was also Elsie’s first public performance – in her nursery nativity this year.

The snow has certainly made things miles more festive this year,everything obviously looks and feels more Christmassy – so double the nativity plays means double the Christmassiness.

Lily’s school play was called ‘Santa and the TV set – and Lily had a bit of a starring role, playing Santa’s nagging wife, taking inspiration from goodness-only-knows where:


Elsie’s nursery had a more traditional Christmas nativity, and rather than go for an obvious role like Mary or the Angel Gabriel, Elsie wisely took the all important support role of a Christmas pudding.  Despite the wisdom of her 19 months, stage nerves eventually got to Elsie, who crumbled to tears soon after seeing parents and sister in the audience.  Halcyon days. Pics here 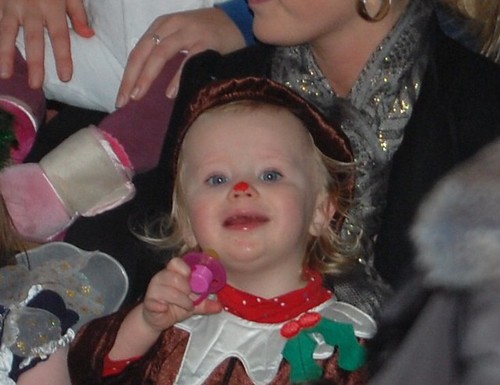