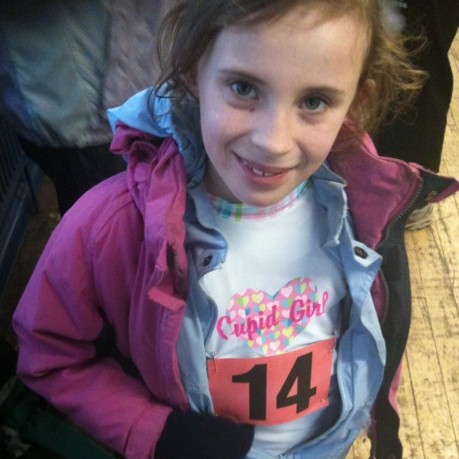 I don’t think my legs have been that filthy in years. A very badly timed afternoon of thunderous rain and hailstones rounded off a pretty bad few wet days here in Rossendale, and Lily and I were pretty much committed to going to one of our local fell races.

Lily took part (alone) last year in the ‘first race after the clocks change’ and aside from my predictable gushing pride in seeing my eldest gritting her teeth and warming [sic] up in the freezing rain, I had to get my own head around my first fell race in 18 months, and first running race in over a year. Last year’s broken collarbone meant that a return to competitive (and I use the term loosely) running in 2009 wasn’t on the cards. I managed to get back on the bike fairly quickly after the injury but running just wasn’t the same.  I managed to start running again properly in Autumn but by then we were into the cyclocross season and although I’m not bit on fell running I do like to dabble a bit.

To do a fell race after so long a break was part good, part horrid.  It wasn’t the most beautiful of courses (it’s Rossendale – but even Rossendale has a few good ones – such as Whittle Pike) – it was more that I’d gone into the race psychologically under-prepared. The first mile or so was hard, but somehow it kept on being hard – I’d forgotten that running basically is ( – hard!)

The race also took place concurrently with the children’s one, and although friends Cathy & Carl were on hand and I knew they’d be looking after Lily after her finish, part of me wanted to be with her – watching her take part.

Lily had once again done herself proud – finishing in a smaller field than last year on a much more rain sodden course in a respectable time.  My result too was reasonable – 15th out of 142 competitors – but somehow, just the getting it finished and under the belt was enough.  I want more… but maybe something a bit prettier and bit un-grittier next time. Liver Hill is like its meat namesake… a tolerant and partially satisfactory bit of meatiness when better stuff isn’t available.