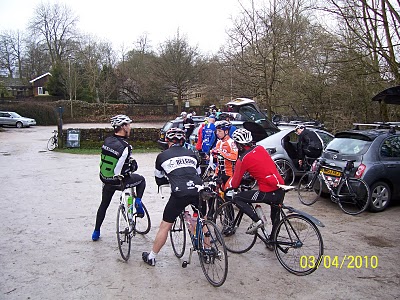 It’s been a fun day – I don’t do much social bike riding in a busy life but when I do, I want the rides to be like today’s in inaugural Ronde van Oost Lancashire. Billed (roughly) as a local answer to my favourite classic the Tour of Flanders (or “Ronde van Vlaanderen” in Flemish), the Tour of East Lancashire set out to mimic, amitate, and at times outdo the Flemish classic .

Alan Dorrington – mate, general cycling fanatic and specific Belgian cycling anorak had the notion about 18 months ago to hold a social randonee taking in the finest agricultural lanes, cobbled climbs and wonderful, inspiring backroads based roughly in a 15 mile radius of Burnley. The RVOL has it all; killer steep climbs, no-go road-race roads, bail-out cobbled climbs, and – for its relatively whimpy 50 mile length – enough of the above to leave you wanting no more. A good deal was packed into the first few miles – so much so that the duller interlude after 20 miles or so on the Burnley ring road actually came as a pleasurable break. Average speeds are out of the window on a ride like this, this is a road ride done at off road pace.

It also came as a bit of a tweet up – (a meetup of Twitter users, mum). You get to know people in today’s online world, and getting to know then then riding with them and chatting with them is a lovely treat. There people are the legends of your own screen – you get to see them in the flesh – then actually ride with them. Brill.

The ride itself – for me – took a slightly odd turn when Alan’s rear wheel stopped being the round thing that you want them to be. Cheap Taiwanese carbon fibre doesn’t like going down the 1:4 Mytholm Steeps and the heat from his tired old brakes rendered the back wheel banana-esque. A shortish stop to mull over the options at Hebden Bridge resulted in my deciding to get my head down and hammer it back (that’s just being romantic about it – things were slow!) along the rather hilly Widdop Moor back to the ride’s end, to get the car and go and pick Alan up. (Thankfully, in the mean time, he was rescued by a passing friend in a car – so I was free to just drive home instead!)

Great, memorable, hilly, fun day out over some great roads; afternoon playing football, tents, babies / prams etc. with the girls. Moules Mariniere and a few beers in the evening. I may just well be living the dream.