In a way, it’s a strange discovery; one of those little unpredictable things that happen in life. As a cyclist who’s done a bit of everything on a bike, and still would do if he had time, I’ve found myself refining my cycling to niches and events that present realistic but challenging goals. I expect quite a lot out of myself from my cyclocross racing, and when push comes to shove, it’s my primary thing, but those other things that happen – the bits that fall roughly between February and September – have taken an unexpected turn recently – something mailnly down to where I live.

Rossendale is a lot of things, but all of them subtle. Wer’re talking temperance bars, black pudding, etc. Some things it has never been include a desirable holiday destination and an adrenaline junkie’s dream. But wait… scrub that last one. Something’s happened round here to mean that I can put off that trip to New Zealand – cancel the California mountain biking trip… Rossendale just got good. 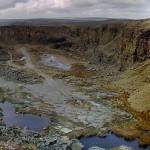 I’m talking specifically about something that’s happened at Lee Quarry and – more recently – Cragg Quarry. Very purposeful very purpose-built Mountainbike trails have come together in the last couple of years that are total thrillzones. Funding is – in part – one of the key factors, but so is the heritage. Rossendale was massively quarried in the last 150 years; not big open-cast things – just huge constellations of minor quarries for valuable stone (the flagstones in Trafalgar Square in London were quarried in Rossendale)

Quarrying’s by-product, after the machinery and manpower has gone, is a messy, unkempt and fairly useless affair. Slaggy stone and oversized boulders and unwanted slabs are a form of human litter that makes you feel pretty bad about being human. Not pretty. But they are the raw materials, given a mini-digger and some nifty trail designer, of some mountain bike trails beyond belief. Scooping about the rock and re-shaping a low-grade environment into something useful is a good, worthy thing. But it obviously still takes resources, co-ordination and a good dose of vision. Rossendale’s ‘adrenaline gateway‘ vision has come lots of people – and helped by my old mates at Natural England and my friend Matthew’s employer – Aggregate Industries. It’s legacy is – in my purely selfish terms, one bloody good set of fun trails to ride.

This morning, within 31 minutes of leaving my house, I was on the brand new (as yet un-launched) route at Cragg Quarry – pumping my bike round some swooping, whooping corners, dips, berms and semi-gnarly bits in almost trance-like joy. Let’s get things straight here – I’m bloody forty. I’m not some thrill-seeking teenie in the skate park – I should be past all this. Is it over-dramatic to use the term ‘epiphany’ ? I think that’s what it is. There I was – getting in a ride just before work – on what must be 2 miles of the best MTB trails in the country. In the far distance, wind assisted, I may have been able to hear people commuting to work on the A56… but I wasn’t listening for them. I was busy.

Lee Quarry, further away from my house, is a bigger, more sprawling brother of Cragg Quarry. They will eventually be linked up across the moor by an improved bridleway, but for now, it sits on its own and access is usually from Bacup. Being much more on-a-hillside, Lee Quarry is like a Mountain bike ski resort. Various ‘runs’ exist alongside the loopy ‘routes’ that can make it into a more logical cross-country affair (for those of us who can’t get our heads round going up and down the same bit loads of times). Only recently (and with some new route work carried out) has it become possible to just ride up and down the same bits purely for the fun of it. This has upended my long-standing notion of what Mountain Biking is really about.

Mountain biking to me has always had a pioneering element (I used to go out in the early 1990s and NEVER leave home without a map in my pocket). It was about exploring; seeing how different bridleways met up and made a good ride. With my ‘only an hour to spare’ type of approach to cycling; these new trail centres have started to make mountain biking itself something totally new. This is ski-ing and snowboarding but on a bike. Up, down, pump, jump, flip, twist, skid, slide, whoop…. up to the top again and then down, pump, jump, flip, twist, skid, slide, whoop etc. No bridleways ticked off. No maps. I’m doing something different.

Things have changed round here.