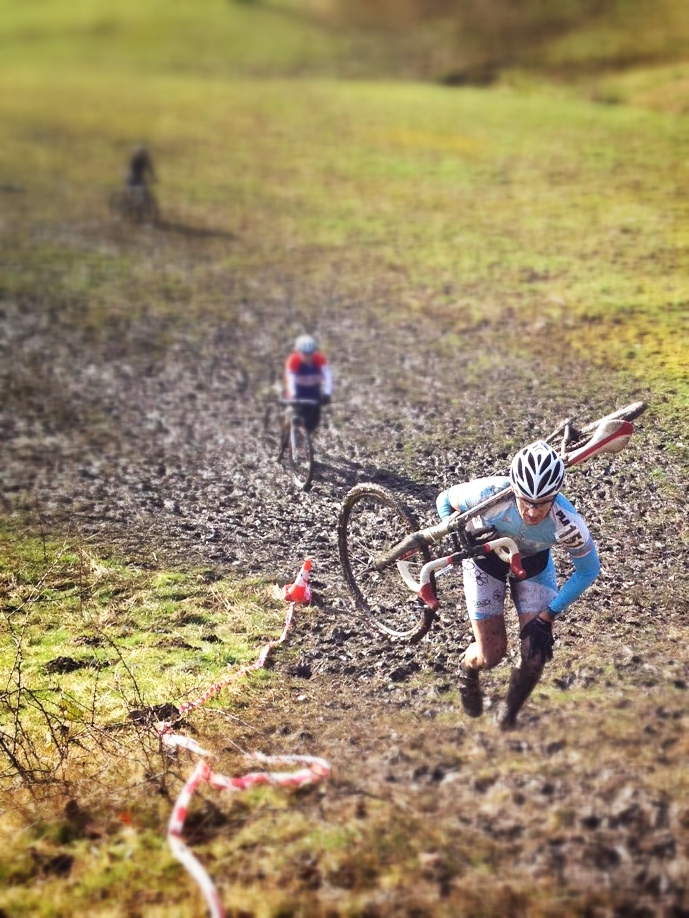 The “Field of Despair” is a melodramatic, semi nonsense term, applied to about 150 metres – if that – of almost unnoticeable uphill grass on Hit the North. Hit the North, a low-key, well attended, high fun race, is good at bigging things up. The numbers we get given say “Purveyors of Awesomeness Since 2008”. The course deliberately features laughably un-ride-able bits. The chief marshal was walking the course with a sign saying, “Pedal harder, you bastards”. Calling a field the “Field of despair” is a very Hit the North thing. Bigging up the stoicism.

Except, when you’re taking part, that is just what it is. Utter despair.

The course has lots of things. Some new singletrack, whoopy jumps and berms that make any bike feel awesome, some tricky, nadgery descents, slow rocky bits… only just ride-able river crossing, but the Field of Despair is the horse meat in the Hit the North burger. It’s the bit that you don’t like to think of when you say how nice it is. It’s shocking, distasteful, and borderline immoral.

Taking approximately two minutes to cover each 20 minute lap, it plays mind games on you. It’s only just about jogging. About keeping moving. The muddy bike on your muddy, weary back is a weight-augmenter. It drives each foot step deeper into the soaked bog. It’s only ankle-deep. Each 40cm step you take. Squelch. Squelch. You look about you. You carry your cyclocross bike. You sink deeper. Who is moving marginally faster 15 metres to your left? Should you take that line? It’s faster. Way faster. We’re talking 3.5 miles per hour. Best.

Then there’s a hill. Just a short hill. With the acronym ‘MTFU’ sprayed on it. By someone who is more of a M than me, obviously. It’s 25 to 30 strides at the most. Piffling. People stand there, taking photos. Clapping you by. There’s even a salsa band. Messing with your head. Did your stride rate just go down? Did they speed up?

Why do we do this, then? This 2 hours of racing every February, business.

Well… paradoxically, because it’s fun. Chris Boardman made a comment when he was in his heyday. Something about it being ‘satisfying’ rather then ‘enjoyable’. Like the way that hitting your head against a wall is nice because it feels nice when you stop. I’m competitive enough a personality to be unsatisfied with tenth place. I didn’t have a fantastic result but that’s the way I’m getting used to it, these days. But boy, it was fun. People smiling, having a laugh with other guys suffering whilst you lapped them, thinking it’s harder for them. It’s a shared pain thing.

I was asked at the end whether I enjoyed it. I have a stock answer for things like that. “I wouldn’t do it if I didn’t enjoy it”. I’m here because I race bikes for fun. Despair is just part of having fun, when you’re riding Hit the North.

Thanks to Jason Miles and Andrew McHugh – organisers. They are lucky buggers to not be riding. It’s such a great event.

Thanks to SportSunday, Ed Rollasson, Alan Dorrington and Andy Waterman for these photos, and, of course, to Planet X Bikes for their continuing support, and the best bike at the race.