I rode my bike a long way. And with a lot of climbing.  That’s all. END_OF_DOCUMENT_TOKEN_TO_BE_REPLACED

I recently wrote about a love hate relationship with Strava. The app that bikes back doesn’t want to go away.

Some try to sue them, love, some hate, but it’s not quite like Marmite – as we all seem to love and hate it a little bit. A little bit like real racing, we love it when it goes well. We hate getting beaten.

But perhaps most significantly, it does seem to change the way the more competitive-minded of us go about our training rides. Even on a nice day. So the other week, I made a short film.

Can be watched in HD here. 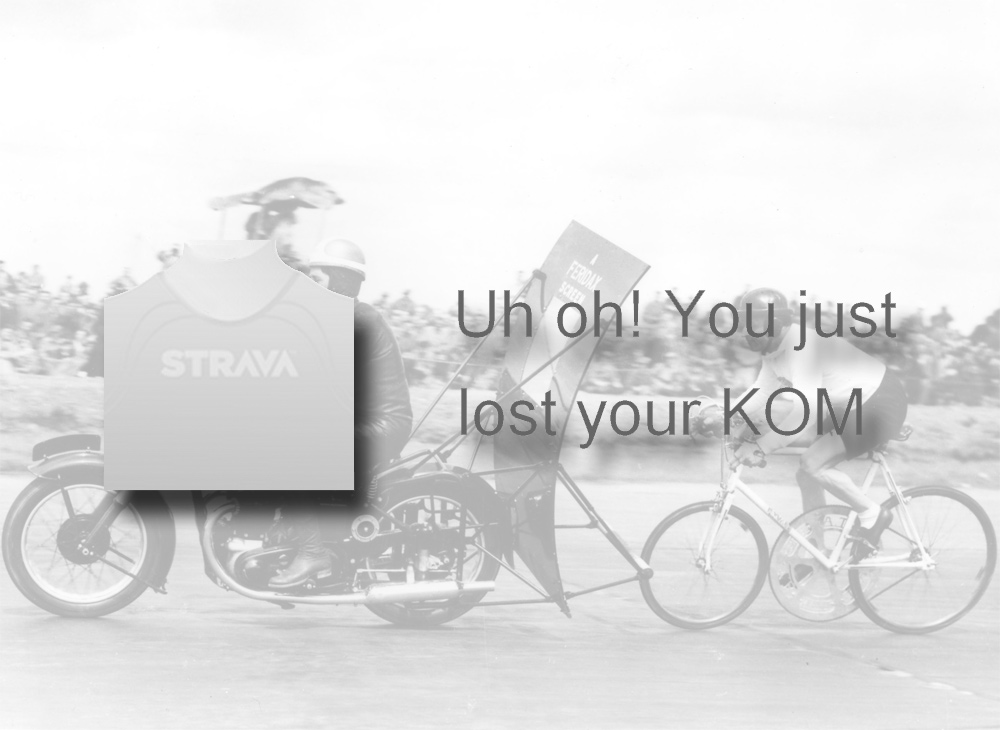 It’s been nagging me for a while, this one. This is about sport , technology, monitoring and stats. It runs to the very core of me in a number of ways.

I’ve been using fairly detailed recording of my cycling and running for over five years now, since I first got a Garmin Forerunner GPS watch. It suited me. I do a lot of training on my own – probably much more than the average cyclist or runner, so the ‘virtual’ training partner’ it gave me helped. I’ve rarely been out running or cycling in the last few years without thinking about what the average speed, heart rate, calories burnt… or any one particular element of the ride (heck – even total mileage, sometimes… heaven forbid). When Strava was introduced to me by Alan about a year or so ago, I thought it was perfect. For those of you who don’t know it, Strava basically allows you to ‘compare’ yourself – your ride or run – to anyone else who has done the same bit as you. These segments are “public”, so you get to see the ‘results’ for a particular segment (the leader is ‘King of the Mountains – or KoM / QoM for females – for the climb or descent [sic]). It’s a very simple motivation – in the middle of an otherwise routine ride – to push yourself.

The purity of that is lovely. ‘Competing’ against ‘real’ rides done by other people – sometimes famous athletes, even… you can soon see how the motivational factor is a great pick-me-up or boost when you’re doing that annoying short climb after the lights and your mind might drift from the training you’re supposed to be engaged with. It’s satisfying too, to visit somewhere you’ve never been (such as my trips to Sardinia or Arran last year) and find out what other people you’ve never met and will never meet have managed on a particular climb or descent. Even better, you can look at some great stats in the middle of races, such as the various obvious ‘segments’ of the 3 Peaks Cyclocross – seeing where you performed well or badly compared to fellow competitors.

Every Silver Lining Has a Cloud

The press is rife with stories about segments that ought not be. There are countless ones I know of where the segment may include lights in the middle of them, some on footpaths where, even being generous, we’re borderline meant to be riding – let alone racing (albeit virtually). There’s even one on a canal towpath I’ve heard of. You can picture the flailing bodies of pedestrians thrown into the water as cyclists on tri-bars belt past them. It’s just not really right.

Despite it being a good idea to ride hard when training, giving people free reign over where they race and don’t race is always going to lead to a few problems with the more competitive-minded ones of us out there. It’s hard to ignore the opportunity of a bagging a good KoM when you’re feeling good, and once you get into racing mode, you start to take a few risks – unnecessary risks, in this case, of course, because you’re not actually racing.

A bit like time-trialling, a mildly impure form of racing because it relies on varying conditions, yet everyone sets off at different times, Strava suffers from extreme variations in conditions. Severe (even storm-force) tailwinds can skew (daftly) the speed on some sections of road. So can the heat, traffic, time of day, even who you’re riding with… are they even out there motor pacing? Who knows? It’s just a GPS record. They could be (and often have proven to have been) driving in the bloody car. They could be out in a chain-gang.. through and off – you’re never competing on a like-for-like basis.

That’s why I love road racing, Cyclocross, and Mountain Bike racing. The gun goes, and there you are – amongst them. The whippet climbers, the daft ones who sit on the front and then shout at you for not coming through, the ones who show little stress then suddenly blow up, the skilled ones, the powerful ones… despite all of the mirrored shades, you get to look at them in the eye. You’re racing them.

I’ll stay on Strava though. I (like everyone else on there) have enough positive motivation from it and (think that) I can resist the temptation to go for any daft KoM segments whilst trying my best to keep good speeds up where I can and where it’s appropriate to my training. I’m not dwelling on there, though. Forgive me for not paging through who’s ahead of me or behind me on certain segments. I didn’t have the legs / tailwind / motor assistance that particular day.

But perhaps what annoys me most of all, is that people can ‘name’ their own segment, can’t use normal sentence case, or spell ‘descent’, so my achievements are forever described by some Klutz’s bad grammar. That one kills me every time.