The relocation of my brother Phil to his new job in Lancaster – and soon that of his family, as soon as they find a place to live – is starting to have an impact on me in a great way. It’s just so great to be able to meet up and do things pretty informally. His life and home in Devon were so great and visits were brill, but it’s such a big deal to get in the car, pack all your stuff, and ‘organise’ a trip.

A couple of weeks ago, just after Phil started, he popped down for the evening, after work – a meal, a few pints, all simple stuff, but stuff that’s been missing for so long. 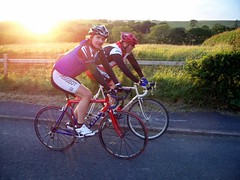 Last night, I met Phil with an old friend and long-term colleague Richard Bardgett, thus reforming – in a small way – a set of cycling buddies I used to pop out for occasional cheeky evening rides with in… well… about 1993 ! The lanes round Longridge were a great choice for some lovely mellow chatting (we saw about ten cars all evening) and just to be able to get out and enjoy a nice bike ride without ‘training’ was so good for the soul. (My only non training rides in recent memory have involved a trailer-bike being attached to the back!)

We’ll have to do it again some time. Maybe let’s not leave it so long till the next one.