The weekend just gone was the last of my really lovely long weekends since Elsie was born just before the May Bank Holiday. Rather than take a hyge chunk of paternity leave and putting unnecessary pressure on Reverse Delta, I thought it would be best to take off Mondays and Fridays for a few weekends whilst things bedded down at home and we got a routine established. 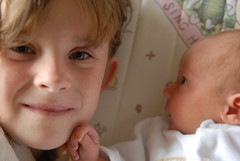 On reflection, and I’ll admit that it’s early days, things have been really quite relaxed and easy for us to adapt to. With a second born, there’s so much less adjustment because it’s more about resuming a familiar routine. Add to that that Elsie is a bit more of a sleeper and eater than her elder sister and it all makes for a very chilled existence.

The long weekends though have had a special value – working from home has meant that I can roughly keep abreast of my work without that ‘out of office’ panic. With Lily being at school it’s also meant that I get two days with Lily sandwiched by two days with Katie and Elsie. The unusually dry – I’ll say it again – unusually dry spell of weather that East Lancs has had has made the weekends generally outdoor affairs, be it gardening, or walking, or – just occasionally – some more strenuous activity. 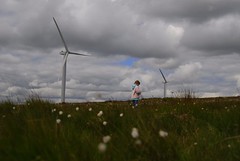 On Sunday, Lily and I had a great trip up Knowle Hill – about a four mile round walk all in all from where we’d parked – to watch the annual fell race up there. It’s a hill I know reasonably well, but for some reason I’ve watched the race there twice and never yet taken part for one reason or another. My friend Matthew was taking part, something that gave Lily and I the excuse to head off for a couple fo hours togather watching the fell race (photos here) and exploring the new Scout Moor windfarm (photos here).

The down side was that this – and the rest of the weekend’s activities – were carried out without Elvis, who I took running on Thursday evening and brought back home with a two inch gaping wound in his belly – somehow. The vet sorted it, but he’s on an enforced rest now as a result.

It’s all happy times here… just keeps on getting happier.