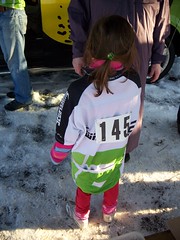 My annual payback day came on Saturday – the day when I organise a bike race of my own, and as usual it was one intense combination of utter stress and deep satisfaction. It’s not just me doing things – obviously – and this year just like all the others made me feel such a glow at all the really ace people who mucked in and made things happen. It was also a special year because Lily rode her first event. I say ‘rode’ – the harsh conditions of snow and hills made the Under 12s race – like all the others – a real genuine slog. I knew I’d be called on to push and help out all the way round the course, but for so many of the children there was more running than riding. That said, the sense of urgency in Lily’s running – like that of the other children – was so utterly heart warming. This was a race – not a walk in the park – and there was no moment in those 15 or so minutes that Lily had her mind on nything other than getting round as fast as she could. She shouted to me in the middle of the race something that sounds of no consequence to many people: “Dad – I’m really happy”. I knew exactly what she meant. She was competing – giving her best, and getting something directly back from it. Sometimes if we don’t compete we forget that simple feeling. Having had this snow stick around made the day quite arduous for me and the team around me. The course needed to be drasticlly re-routed as the tarmac paths were packed solid inch-deep ice. This meant that the riders had no relief from the mud that sat under the crust of snow. A tough course in tough conditions… hats off to all competitors, young and old. 73 photos here My report on the North West Cyclocross Assoc website here. British cycling’s report here with loads more photos.