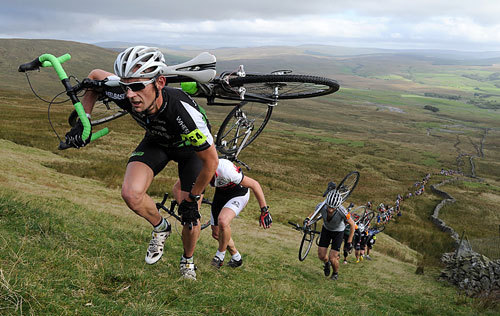 Here’s a conundrum of sorts. What do you do when you have to race a bike down hills like this as fast as you can and have a front brake that looks like this. With a level head, you might be forgiven for making a decision along the lines of “you’ve got work tomorrow” etc. It did go through my mind, and for a second, I thought my race should really have ended there and then – half way down the first of three descents. But that wasn’t going to happen, was it?!

It’s once a year, and at the Three Peaks Cyclocross, part of the kit you prepare is the bit inside you that tells you to carry on, and things will be okay. I did carry on, and things were. I blogged last week that “Anyone can have mechanicals and punctures, but 99% of them are due to bad preparation, riding on the edge, or poor equipment choice / set-up. If any of that happens, I’m the one to blame.” – and this was a case in point. Brakes don’t just fall off bikes. Hours of meticulous preparation, tyre selection, gear selection, new cables, chain, even bar tape… it was all down to me – and that I hadn’t tightened a bolt enough after adjusting a brake sprint was simply my fault.

So I had to crack on with it.

The back brake of a bike is a wierd thing on its own. It works so well and its role is so important when paired with the controlling force of a front brake, but when on its own, it’s pretty rubbish. Any slowings-down are hugley ineffective, and stopping is basically down to using the terrain that’s about. Heading up into the headwind on the road towards Chapel-le-dale knowing that I had the descents of Whernside and Penyghent to ride with this excuse of a brake was leaving a nasty taste in my mouth.

The race had been going pretty well for me up to that point. A very piano ride for the first 4 miles in the bunch dealing with a headwind meant we were all 3 mins down on the faster years by the time we even hit the fell. I’d had my usual slower-than-the-fittest start up the climb of Ingleborough – 17th place was actually the hightest I’ve EVER been there (I always finish higher then my Ingleborough position!) so I thought things were going well. By the bottom of the hill, I was in 14th (was 13th for a spell but the brake went and I dropped back). After much faffing in toolbox I just got back on my bike, resigned to some tricky descents.

By the top of Whernside, into a strong wind, I’d worked my way up a little bit, and set off down the hill a bit more carefully than normal. I got my first shock just as I started to drop down off the ridge. A simple section of small drop-offs that lasts for about 3 metres was something I’ve never struggled on before, but on checking my speed coming up to them, I soon realised that a controlled dismount was a better option. Then I soon realised that without a brake to slow down properly, an uncontrolled dismount was my only option. A flailing, leggy, 6’3″ man trying to catch up with his own momentum whilst carrying a bike down some uneven steps isn’t anything you want to see. I don’t again, either… but somehow I stayed upright.

I don’t want to go all melodramatic here – it wasn’t an utter crisis, it’s fairly obvious that this is the type of race that not being in control is not a good thing. I had to work with what I’d got and as long as the back brake slowed me a bit, i was in a position to dismount and run down the tricky sections rather than ride them. It was something I got used to. A day of skills training from MTB Skills coach Ed Oxley in summer came into force, and rather than slowing the bike with my brakes, I was forced to pick my lines well, nail them, and have confidence in where I was going. It was more about confidence than nerve, but also about knowing where to get off and where to ride. It soon made sense and I didn’t lose any places on the descent.

In what now seems a tradition, I caught up with Wheelbase team mate Stuart Reid for the road section that followed, and I had a bit of incentive (and a tailwind) to push things a bit on the road. I knew that Stu would leave me for dead on the next climb but in helping him a bit where I could I felt a bit more like my day’s work was worthwhile.

Penyghent was actually a bit harder than last year on the bottom part of the climb, and almost all of that was down to swinging round into the northerly wind again. I was pretty much on my own all the way up the climb and got into a good rhythm, but twinges of cramp flickered down both thighs by the summit. The cold wind on the legs didn’t help, but it soon went away. I had the descent to come now. Yay. Oh no … no brakes. Boo. A wind on the first rocky section actually helped slow me, but the steepest bit of the descent was pure hell. One brake, resurfaced fast track, and riders coming up. I was reduced to yelling “GET OUT OF THE WAY” at the top of my voice and somehow managed to check my speed by going into a boggy bit at the side of the track. I was really shaken up, but stayed on the bike. Going fast on bits like that is paradoxically slower. I was so worried for a minute or so that I got off my bike and jogged down a bit that would’ve been fine to ride.

By the finish (I think my 3rd or 4th fastest time and my 3rd best position – 14th) I soon realised I’d had a series of close shaves with bigger problems and was in a very lucky position to have done what I did. I could have been a couple of positions higher had everything gone well, but I had stayed on my bike, not been overtaken since Ingleborough, and finished unscathed. I’m still getting used to it really… maybe I’ll have nightmares about it in the coming weeks…. or maybe it’ll dissolve away into my own 3 peaks folklore. That’s what’s special about the race… everyone’s got a tale to tell – everyone has some brush with disaster, but a record 480 finishers seemed to get by just fine on balance.

Right… need to write down ‘check brake bolts’ on my list for next year. 364 days to go.