Had a very satisfying ride out today with Matthew and Ed Oxley. Arranged ages ago it was a bit of a longshot that the weather would turn out so darned lovely, but it did. When you take a punt on the weather like that and it comes off, you know you’re going to be in for a great day. 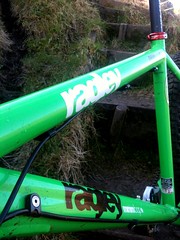 Ed’s a bit of a guru in UK Mountain biking and although I consider him a mate there is a real upward-facing respect thing going on for his riding itself – so to just go out and get a fully guided tour of the kind of trails you will not find on a map was almost blissful for Matthew and I. After dining out on the merits of trail centres all year last year (something I still love and will always do), this was literally grass roots riding at its best. The Calderdale trails are the stuff of legend and didn’t disappoint. It’s also good to know that not all was conquered too. That’s what draws me back there, inevitably.

The most notable part of the day was probably the lowest part for morale – and came roughly four minutes into our dream day out. Cue sounds of bubbles bursting and muted trumpets. The first bit of tech we hit was a short cheeky path known as mmmBOP. Some of you may also know this to be the name of a particular favourite Ragley bike of mine, so a heavy heart resulted when I simply refused the top step – the crux move. There was a switch in me that just went into the off position and locked there. That was it. Everyone has there limits, but for me it’s more a case of unfinished business. I’ll be back.

After that it was relatively plain sailing. Like a downhill trials section in places the trails through varying ages and types of woodland that fringe Hebden Bridge were testing but very, very rewarding. It’s a good while since I attended one of Ed’s mountain bike skills courses last year at Gisburn Forest and today was a wonderful reminder of how learning is important to any sport or skill. What really hit home is that learning is an endless cyclical process and not a single event. Given the basic foundations and catalyst for learning (in this case, from Ed), every ride, on every bike, in every discipline seems to be its own lesson where skills are applied and tweaked.

Today was another of those days. It’s not about the bike. It’s not even about the rider. Today, it was about a new classroom. It’s still learning.