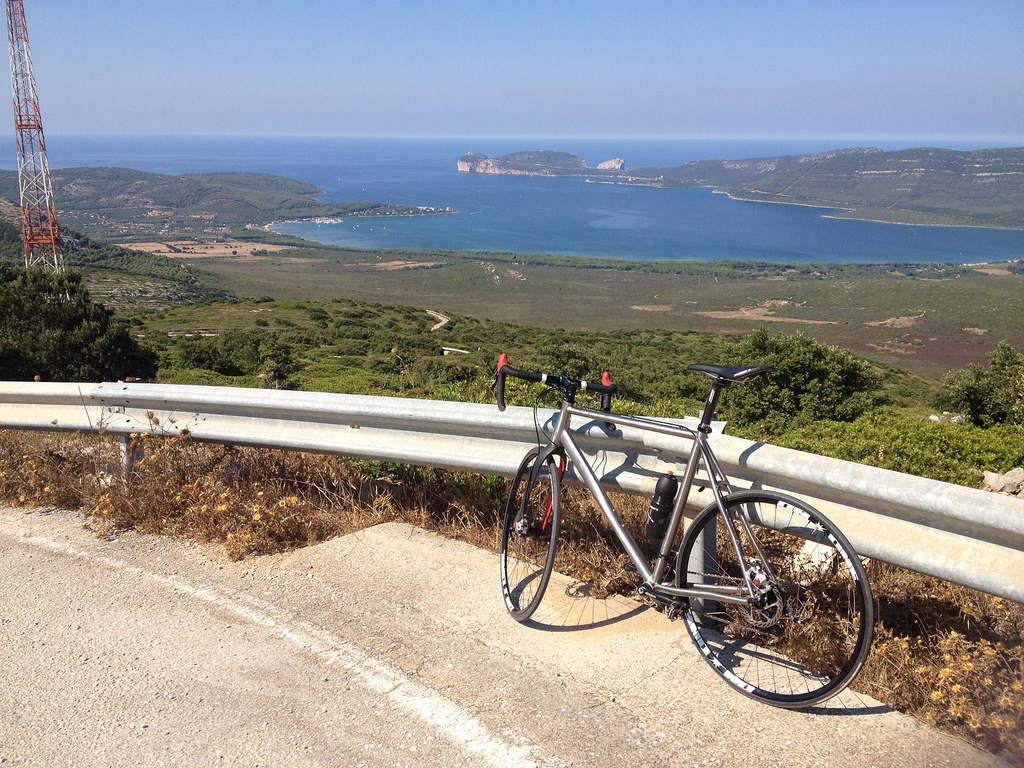 I need to qualify all this first … It’s about squeezing a bit of cycling into a family holiday for someone keen to be fit. Its not about trying to plan a cycling holiday or trip. The following includes references to on- and off-road cycling but this is all just done on the one bike and two sets of tyres I calculated the best to take with me… A cyclocross bike with road and off road tyres.  Covering both bases. (or so I thought)

Being a keen cyclist living in the North or England I have some fine roads and stunning scenery within access and in so many ways have very little to complain about in so many aspects. To moan about the weather is quintessentially British though and this gives me a little inroad into thinking at the moment about riding abroad. By abroad I basically mean where you can go out day aft day in a jersey and pair of shorts (assuming you wash them) and give utterly no consideration to anything else other than a bottle or two and a set of tools.

I’ve been lucky enough to have managed to somehow negotiate bringing a bike on my family summer holiday to Sardinia. This basically means (in July and August) 28 – 34 degrees Celsius as near as you can get to guaranteed every day and some inspirationally different roads. I don’t think we’re on Rossendale any more, Toto.

Aside from the obvious temptation to tweet some envy-inducing photos just to show off (what am I doing…? I’ve become everything I hate!) I’ve found myself deeply aroused in thoughts about this sort of road cycling state of nirvana.

The area we are based is a small expanse of very flat plain surrounded by hills extending to roughly between 200 and 450 metres in height. They’re not mountains but from sea level a few small climbs like that can be deceptively high (I usually ‘operate’ from a 200 metre altitude ‘base’ at my home).

The first thing that strikes me is how the wind prevails. We can generally bet on a westerly and south westerly back home but that rule is frequently broken. Here, near to the coast, there is basically a hot wind blowing inland in these months. It’s odd for a wind to disappear as you climb, but that’s what happens. Above about 150 metres it is generally still. At sea level the breeze is so persistent it can push a flat ‘all out’ ride towards it down to 17 or 18 mph no matter what. It’s one of those things I’m getting used to.

The climbs round here are, as a result, a nice bit of relief, in a way. After three full rides of painful acclimatising (the dry throat you get at suddenly riding in 30+ degree heat a day aft being in 17 degree Lancashire is quite something) they become a welcome relief to the flats. That is generally cycling, isn’t it… I know, but it’s somehow more exaggerated with the ultra straight roads and that nagging wind. I’m a big fella but it’s nice to get climbing somehow. Something real to fight against.

Before I go much further I should throw in another factor. That of age. The last time I took my bike overseas on a ‘holiday’ was in 2000 if you discount a strange bike-child-seat thing to the Ile de Ré in 2010 with the odd fast flat 20 mile personal time trial thrown in at very early morning. As you get older, your body changes in several ways. It’s oversimplifying to say that endurance sports like cycling become easier as you get older but there is something significant in the average age of the Tour de France winner being 29, where most sports’ peaks are much younger. Experience counts for something. Yayyyy! Go!, us oldies.

As a family guy away with (give or take) and hour to ride in this mega heat per day, I’m finding it so much easier than I did in 2000. There are so many factors (there always are), but in summary the whole ‘riding the heat’ thing seems so much easier for me. Maybe it’s simply knowing how to pace / dose efforts etc. maybe it’s accepting a lower pace on a drag or, say, into a nagging headwind because… that’s all it is. Wisdom of age. You take the rough with the smooth and put out power more appropriately and consistently when you ride, not pushing yourself into the red and creating any unnecessary ‘down’ on a hot, longer ride.

3 Aug:
Today was interesting. Nine days into a 14 night stay in Sardinia I tried to push things a bit too far and had a mini-fail. I’d been well acclimatised and had had my only planned day off in the holiday yesterday so should have been fairly fresh. I deliberately threw in a middle of the day ride. The middle of the day is the time when you see no cyclists around over here and it’s fairly obvious why. Even I knew why, but given a great availability slot whilst the children took some time out I thought I would push myself as much as possible and do the biggest climb round here (again) in the noon day sun. It was quite beyond belief at times. The temperature on the dial was 34 degrees. Add to that the inland factor and (as mentioned above) the depressing fact that any cooling breeze is maintained by ground-level land, this formed one of the most supreme challenges I have known on a bike in the compact 1hr and 25mins it took from my day.

All the rides’ GPS available here

The heat combined from directly above when the sun was its highest and reflecting for directly below on the road beneath my tyres was … well … emotionally high. I was cooking and although I had the measure of it in terms of survival, the mere thought of lifting pace or, God forbid, ‘Attack’ would have been comical. Is was survival training and at best hoping that the mental kicking I was dishing out in the heat would teach me to be more manly in some way. Just any way. Anything. This has got to be worth something. Please. Whatever the long term outcome, the sight of my return back to the holiday villa wasn’t pretty. A man cold- showering in all his cycling clothes whilst trying to drink the intent of the shower was not pretty. I’d brought myself to the boil in a mere 85 minutes. God I do hope that there is some benefit here, but right now it’s hard to judge. But at least my wife had managed to do the crossword in the heat..and down a glass of fizz. Somewhere the holiday is working.

Still – it’s a lovely descent… share it with me here…

Oh… and I nearly hit a wild boar.

today’s ride news is that my life was almost brought to an early end by a wild boar crossing the road in front of me whilst descending.

The wild boar also seemed to be shitting itself at the event too, which helped me feel normal.

See it in Slo Mo – I promise it’s bigger than the wide angle lens makes out.  Like a Springer Spaniel sort of a size…

So… Learning from all of this and trying to make sense of the training time available, the last two road rides I had of the holiday were fast, miserable, ball-achingly flat out affairs of one type or another. I wanted to put what I’d found out into the pot and push a cyclocross bike as fast as I could with some 23mm road tyres on. It sort of worked. By riding sensible times of the day, and staying in the saddle on the climbs (long wheelbases cross bikes don’t deliver when you try and stomp it out of the saddle) I managed a 21mph flattish ride in a relatively chilly 28 degrees for an hour and a hillier 14 mile test at 19.2mph. Sort of near the speeds I might expect on the Lancashire roads near home, given the cross bike and all that, but maybe showing signs of being acclimatised in some way.

Basically planned a great route. Hot, hot hot, middle part of the day was when it suited the family so that’s when I rode. Great climb, including the first use of bottom gear all trip (29 / 26 with the MTB double – VERY low for a ‘cross bike) and sweated a few KGs off in a short space of time.  Then double-punctured on a rocky descent.  Replaced both tubes, one failed there and then.  Ran home on flat, carrying bike.  36 degrees Celsius.  3.5 miles.  Road shoes on.  Not funny.  Lesson learnt.

That’s obviously not typical though… so here’s the advice / things to remember bit. The main thing I’d say is don’t forget the sand. I brought one pair of shoes… Road ones… It’s no good to have to walk on the flat, which is what you occasionally will need to do if you try and improvise your way across the drawings they call maps outside of the UK. (surely there’s some export market for the Ordnance Survey). Will it or won’t it be rideable? Who knows? You really have to do as much research as you can before you commit to off road cycling in the med. locked gates and keep out signs on seemingly public routes… some of which appear on the road maps as actual roads too. Hard going. Get a guide, word of mouth, or failing that think of it as exploration unless you have a great route guide or know the area to have superb way marking (as I know some of the Balearics have).

Assume flat bits near sea level are sandy and you’ll be walking bits. Forget average speed quests and say goodbye to Strava. Welcome to off road 1.0 and re-live the fun.