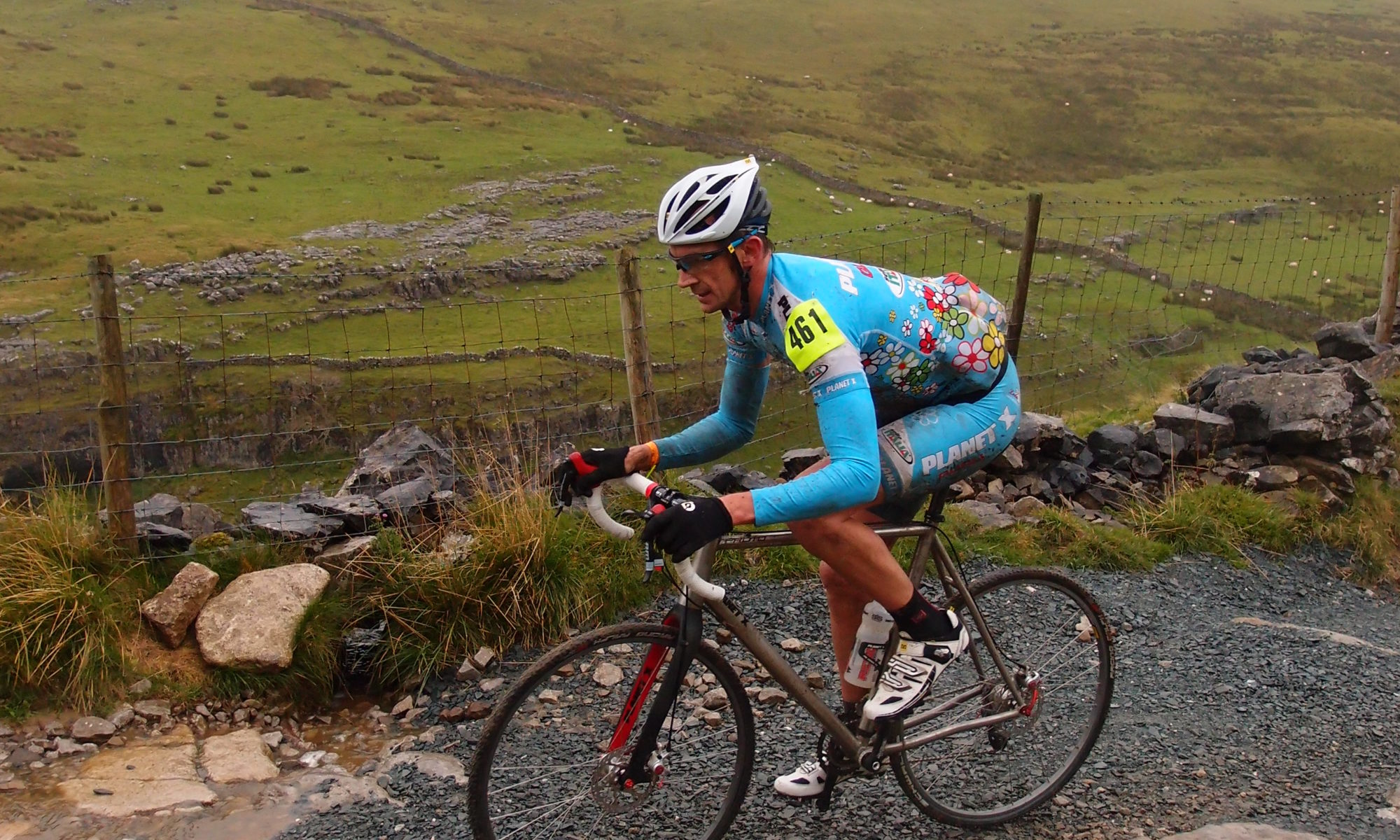 I’m tired. It’s probably not the best time to do this, but it’s important to try and gather thoughts fairly soon whilst still fresh in the head.

My 16th attempt at the three peaks Cyclocross yesterday was a tough one. It was the same for everybody who took part. The weather forecast had been bad, and it turned out to be a very accurate forecast on the day. Everybody was mentally prepared for a hard one. Still, no matter how much preparation you make, it doesn’t stop it from being hard. Yesterday was hard.

I had had a cold the week before the race, and looking back now with the benefit of hindsight, this was probably a good thing. Despite the cold and rain that met us at the start of the race, I felt fairly fresh and fit. Surprisingly so.

The very minute we hit the off road section at Gill Garth, there was something very ‘Saving Private Ryan’ About the mood and atmosphere. What had up until then been something we dreaded, was now something we were part of. The puddles the soaking fields, the falls, the crunching gears, the slow, slow progress up a needlessly more difficult Simon Fell… It wasn’t exactly the stuff of nightmares, and we were all here voluntarily, but it was hard to take any satisfaction from the first hour of the race. This compounded. The ghosting hi headwinds that met us at the summit of Ingleborough made for one of those mountain moments where you realise things are very serious. Survival instincts kick in.

Still, somehow, despite painfully slow progress through fully charged peat bogs, the foot of the descent at Cold Cotes eventually came without too much incident. As usual, I had made a good number of overtakes on the descent, and was starting to get into a serious position near the top 20 of the race.

It must be noted that, in fairness, the weather then played a great part in cheering up the riders. What have been a screaming headwind now turned into a very very useful tailwind from Ingleton up the exposed valley to Chapel le Dale. A strong helping hand, and one that was very well appreciated.

Progress up Whernside was pretty much as per the form book. I neither gained nor lost places on this tough, steep, rocky ascent. Again, on the ridge path that snakes up to the highest summit of the race, the wind played a great part in helping heavy legs to climb the final 200 feet.

Growing with the flow

The descent of Whernside is crucial. It’s not very flowing, technically hard, and unrewarding in the most. Get it wrong and you’re fixing a puncture or nursing some bruises (at best). Get it right and you move up several places. It all came good for me down Whernside. A nightmare puncture on the summit in 2011 saw just the opposite effect. This year, despite howling winds, poor visibility and heavy rain, I kept it flowing and sensible. The bike was sublime. My prototype Planet X Titanium frame seemed to absorb and deflect everything that came to challenge me. The disc brakes were not much sort of essential. I hopped the numerous storm drains to keep puncture-free and put a load of time into people I needed to. Others had been less lucky and I passed people flailing in the nasty conditions trying to fix punctures and mend broken chains. By Ribblehead after a nasty headwind grind along Blea Moor, I was buoyed and upbeat. A change of bottle from Katie and nice to see so many friendly faces cheering us all on (thanks!).

The down side of all that fortuitous descending was that I now then to face a tough cross/headind section of road to Horton in Ribblesdale. I powered on at what I can only really describe as a pragmatic pace. I could see no riders in front and none behind. Locked in no man’s land it would have been crazy to drive on really hard here so I made the most of the little descents on the undulating road to drink and eat well.

Reaching Horton for the final peak of Penyghent I was feeling very pleased with myself. In 13th and with a good buffer over the riders behind, I may have even had the opportunity to pick off a few fading or unlucky riders on the last mountain. Riding through knee-deep puddles (here!) and over soggy limestone up the lane, I just kept everything rolling well. But this was where my luck was to end, and, after riding approximately 570 miles of Three Peaks Cyclocrosses since 1995, I had my first ‘uphill’ puncture. Quite what caused it I’m not sure. It was wet, gravelly, and it’s likely to be a flint. There was no bang or big hiss, but it deflated pretty quickly and was flat in a minute.

I’m cross with myself a bit here. Looking back I had a mental wobble that cost me time. The exhilaration gets to you sometimes and instead of making a snap decision about what to do, I dithered and took the wrong decision. I tried to remove the valve core and inject some sealant into the tyre. That faffing took about 2 – 3 minutes and a further minute of trying to get it inflated with a CO2 cannister. In the end it didn’t work out and having lost 4 or 5 minutes faffing I set off up the remainder of the climb on a flat tyre. I could have bloody done that five minutes ago!

Riding with a flat isn’t all that bad sometimes. With a tubular tyre, well glued on, and some gritted teeth (not thinking about the cost of a new rim or tubular) you can generally keep the bike together. Given that most of the climb ahead involved pushing or carrying the bike anyway, it wasn’t a huge distraction. The descent, of course, is where I really suffered. Watching hard-earned places flitter by as I grated and shuddered my way down the wet rocky tracks painfully slowly would have been hard to swallow were it not for it being my only survival option.

Reaching Katie and my spare bike at the bottom was little short of blissful. I launched myself off into the final bit of road and caught / passed three riders, which was as satisfying an ending as I could have whittled from the debris of Penyghent.

Satisfied? Yes. Frustrated? Only mildly. Do I love this race? I do. Is the pope catholic? Indeed, he is.

Katie – bike and bottle love,
Tolly – keeping Katie sane at Ribblehead, Jersey safeguarding
Jean & Bill, Mum, Phil (in lots of ways!)
Jo (cakes!),
Emma (Tweet delegation)
Alan and Carl for training on’t hill when we really should have just done waterboarding
… but most of all Thanks to John Rawnsley for making my life exciting every September and beyond, and to all the officials on race day, for the last 50 events and all those since 1995 that I have ridden.