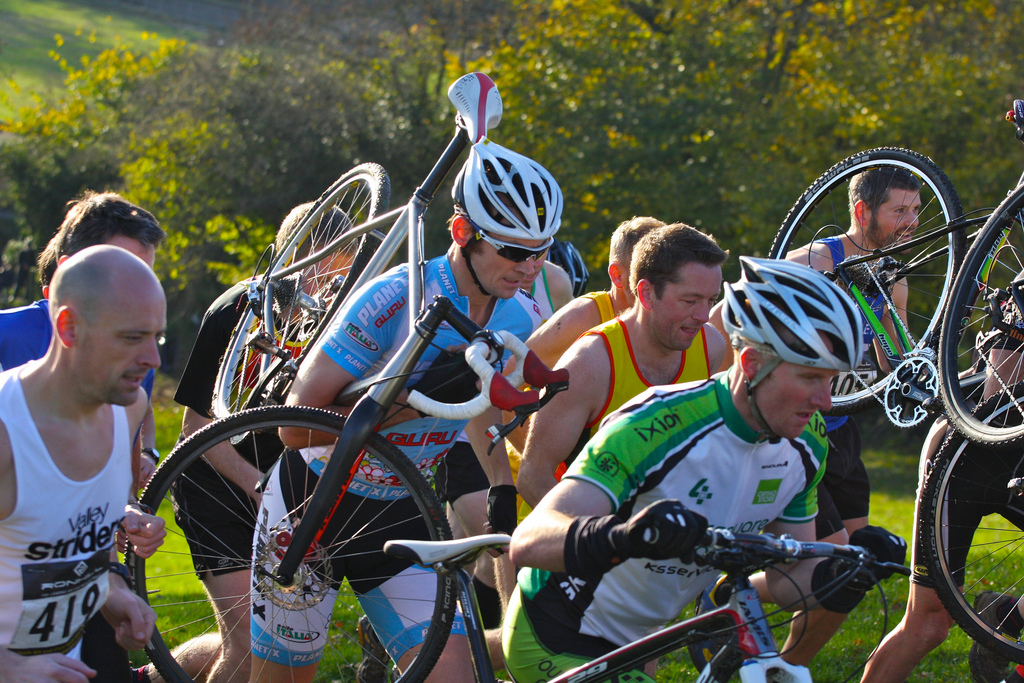 Had a truly great day out on Saturday at the Harriers v Cyclists.  It’s a very special event.  Unique, light-hearted, but serious and brutal for the shortness of the course. It also covers a load of different topography in the  It’s my fourth time there on the course that crosses farmland, ancient woodland, heathland and open moor in the 5.3 mile out-and-back course onto Baildon Moor from Shipley Glen.

What, of course, is truly special is the mass-start between runners and cyclists, then elbow-to-elbow battles that ensue.  The bits that are better for runners, better for cyclists, the neutral bits, the little nasty bits for both… and a good dose of cow shit every now and again.

Although it feels a very familiar event (probably because there’s a lot of similarity with the 3 peaks!) I looked back through the history books and realised I’d only ever done the event three times before. Above all, it’s nice to know I can PB in my 40s, too.

The day was made that bit more enjoyable by lift-sharing with Matthew and Carl (who both ran for Rossendale Harriers on this occasion, though both have ridden it in the past).  Good bonding and the usual craic – and a while since we’ve all been together like that.  Good stuff.

It seems to be the last survivor of a tradition to have similar events – some great ones from the past on the British Pathé archives here from Ireland in 1930 and here from Walsall in 1929.  It’s not too hard to see as these things have died out over the years as the world has become more “leisurely-leisure-oriented” – this brand of stoicism is very northern-European and quite niche – but somehow it’s make a real comeback in Yorkshire (who’d have guessed it, eh?) – with twice the number of competitors this year than when I first rode it in 2000

Thanks to Laura and Dave at SportSunday Sports Photography, Jo Allen (loads more photos here) and Robin Bradbury for some photos.