Lovely to hear John Shuttleworth on the Vote Now Show late on Radio 4 last night. The track’s here if you missed it – his wonderfully crafted lyrics are a great take on the three horse race that’s unfolding before us…. I think he has a point. If Nick Clegg was called Nicholas, he would inevitably get less votes.

Here’s the track for those of you who missed it:

Wouldn’t you put a tenner on
Somebody called Dave Cameron?
He sounds a like a friendly bricklayer
Or even a professional darts player
(“Dave, you require double-five”
– Well – he wants number 10)

By the way, I wonder if you knew
That Nick Clegg’s a former member of Kajagoogoo
Oh no – that’s not Nick Cleggs that was Nick Beggs
Apologies I’ve made a slight boo boo

If Nick Clegg’s was called Nicholas
Voters would think him ridiculous
But as he’s just plain “Nick”
He’s as solid as a brick
He’s the one the others must lick
Shame his middle name is Benedict
(no I’m only joking… )
Oh – and a lovely reference in the lyrics to ‘Gordon is a Moron’ re: the 1978 hit by Jilted John (Graham Fellows – or John Shuttleworth in a former punk skit role) – flashback below.

With a general election looming, I thought it was time to remind all the dedicated readers out there to remember some important things about democracy

2. Don’t vote for people who would wipe their hands after shaking hands with you

3. Be prepared to ask the right questions and push for an answer

4. Have faith in Parliamentary Democracy

A funny thing happened this morning. After Lily got a 12 week old female rabbit called Daisy for her birthday in September, our three year old Rabbit to a great interest in climbing on her back – immediately – as rabbits do (all rabbits, it seems). Time came for a slightly pricey but inevitable castration if our two big eared chums were going to be room mates.

On taking Ozzy to the vets this morning for the big op, I was given the wonderful – if a little surprising – news that Ozzy, is in fact a lady rabbit. It’s going to take some getting used to, but we’re £45 better off. (The vet reckoned the immediate ‘mounting’ habit was acommon sign of dominance amongst female rabbits). I wish my face could have been caught on film. Dying to see Lily’s reaction later.

Given the fun that my dog Elvis has with his frisbee, I thought it fair to show you a video of a new way humans can discover a newfound love for this simplest of ace toys… END_OF_DOCUMENT_TOKEN_TO_BE_REPLACED

A great day out. It’s such an event for me – and to have it at Bradford, within the hour from home, was such a pleasure. Adding to that pleasure was the fact that mum, Katie and the girls could all come out and watch me on the relatively short day trip.
END_OF_DOCUMENT_TOKEN_TO_BE_REPLACED 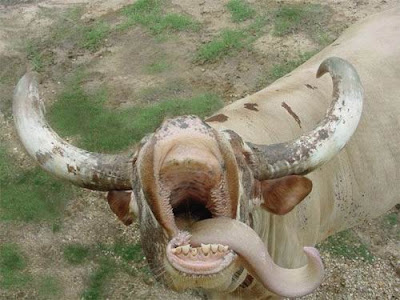 There seems to have been an irritating number of cutesy “look at a puppy kissing a kitten” type emails hitting my inbox recently. Much more than normal. I’m not sure whether the global economic crisis is leading people into some sort of goo induced love of everything innocent; maybe the escapism is the way out of things.

Anyway, I just throught I’d post this reminder that the world is strill a very ugly place, as are most of the animals in it, as this post on Ugly Overload proves.

Get the Flash Player to see this player.

It was Lily’s school Christmas Concert on Tuesday and she and some of her friends danced a delightful penguin dance. Sorry for the rubbish mobile phone quality of the fillum you’re about to watch. (Lily’s the one on the far left at the start and finish)

What’s the music called? It’s so familiar and on loads of things but I don’t know what it’s called and who it’s by. I Googled it: Perez Prado – “Guaglione”.

Oh, and on the subject of fish, which we almost were (it’s something on most penguins’ minds):
Two fish swim into a concrete wall. The one turns to the other and says, “Dam!”

Something about the rather significant things going on on the other side of the big pond that makes me feel like we’ve reached a pretty momentous turning point in world history. Much in the same way that in 1997 I felt a massive relief when Labour ended a very long Tory rule in the UK, the democratic win in the US is more than a democratic win or a fantastic historical moment when a black person enters the White House; it’s the end of Bush. Hoo – bloody – ray.

When I was thinking back earlier to the great feeling in 97 that took me over (as it turned out, for good reason), today’s feeling of “I was there when…” makes me feel more slightly pensive. History, whatever happens henceforth, has been made. I really should buy a newspaper and keep it carefully in the attic, like I did do for the millennium (you’ve no idea how hard that word is to type for me), but these days it seems more apporpriate to mark history by showing what’s going on in my online world.

The Guardian online daily emails have been a part of my online world for about four years, I think, but what I hope will happen is that the attached screen grab will show history in so much more ways that are not interesting now. I hope that in future years, we’ll love to look at the number of spam messages i had in my spam box, how my gmail offered me only 7.2 mb of space, and other thiongs we accept today and will be a quirky oddment in the future.

Just the same as if I bought a newspaper today on the occasion of Obama’s historic victory, the really interesting things would turn out to be the adverts on the side of the real news items on the paper.

The Fred Whitton Challenge is billed as a 112 mile sportive ride for charity around the English Lake District, taking in six of the major passes en route… starts and finishes at Coniston, and includes the climbs of Kirkstone Pass, Honister Pass, Newlands Pass, Whinlatter Pass, Cold Fell, Irton Pike, and finishes with the brutal Hardknott and Wrynose Passes.

I’ve ridden the Fred Whitton Challenge in the Lake District for the last three years now, and seem to have got by on not much specialist training, but today’s event was the closest I came to coming unstuck! Although I’m not too gifted as a climber and don’t immerse myself in the world of long training rides, I’ve managed to get by on some type of fitness or other in the past. This year’s preparation was taking it to extremes, with my longest ride this calendar year being 2 hrs 15 minutes (the ride is generally over 6 hours). I also had a three week chest infection which culminated in a course of Penicillin starting on Wednesday. We’re not talking ‘training camps’ here.

But cometh the hour, cometh the Loafer, and I managed to somehow avoid death on the hottest extended bike ride I’ve ever done.

Avid readers will remember that I cleverly decided to ride as a domestique last year (a team helper), hammering the pace hard for the first 50 miles, and cunningly giving myself an excuse to do the rest of the ride at a relative trundle. Well this year I had a helper – a super-domestique in the shape of last year’s record breaking rider Lewis Craven, who’d been equally slovenly in his training in recent months, and was quite happy to work like a horse with me on the front of the 50 strong group until the first ‘killer’ climb at 45 miles; Honister Pass.

Whether the pace or the lack of training was the undoing of Lewis and I is up for debate, but come undone we did, big time, later on.

On the descent of Newlands Pass, Lewis punctured, and we agreed that I should push on at a leisurely pace to the top of Whinlatter Pass, where I’d wait for him if he hadn’t caught me. And wait I did, for ten minutes, until one very dead looking record-holder emerged up the climb. Lewis had blown and we were half way round. Bugger.

We took things really easy along the western side of the course, and decided at the second and final food stop (Gosforth) that it was time for a good rest and a gossip, so we ate and chatted to a few helpers and set off back ten minutes later.

The approach to Hard Knott pass, easily the hardest part of the route, is purgatory. Especially when you haven’t done the training. But up we rode, where most decided to walk in the heat, and were starting to approach home and dry. It was 28°. The heat was a contributing factor in Lewis’s second puncture on the hairy descent of Hard Knott pass (the hot rims from braking melted the rim tape and a spoke poked into the tube!). I mended it for him this time. He was in a worse state than me.

We pressed over the final climb of Wrynose pass and rolled home rather flaked out and a bit sunburnt in a pretty unremarkable time of over seven hours.

Oh well. We still winged it I think, considering the lack of training. And we were mini heroes in helping keep the pace so high early on that Wheelbase team mate Rob Jebb manage (along with national hill climb champion James Dobbin) to break Lewis and Stuart Reid’s record for the event. Bitter-sweet stuff for Lewis, but that’s cycling. He was modest and full of humility throughout though – a very respectable man!

Went to watch mum in a play of Dad’s Army last night at the Grand Theatre in Lancaster. With a familiarity of Dad’s Army on TV, I’m not sure what I was expecting. I certainly wasn’t expecting it to be such a faithful copy of the original.

The play itself was essentially three episodes of the TV series. With Dad’s Army being a studio set series, it translated to the stage fantastically well. Excellent casting and make up made it eerily like the TV show, and disbelief was fully suspended for the evening. The TV show’s canned laughter was replaced by genuine laughter and it made a great play. Mum’s performance as Mrs Fox – Lance-Corporal Jones’ unofficial other half (originally played by Mollie Sugden on the radio series) was refreshing and, like the rest of the cast, convincing. I was very proud and shared her pride in a great performance.

One of those classic moments relived last night:

I love you. Print your own.

This reminds us all why fox hunting was abolished for its barbarism. 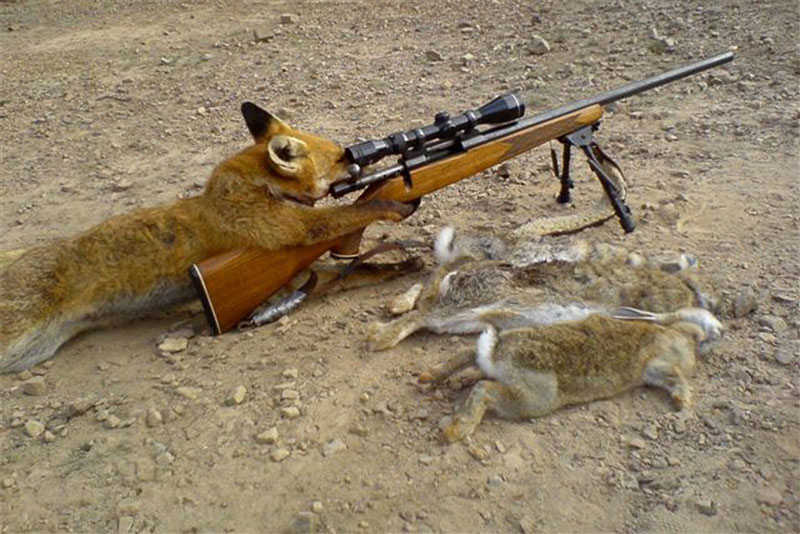