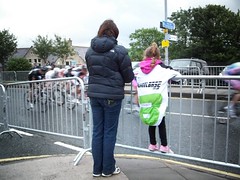 We took a family risk last night – hard for us middle class types – and let Lily stay up on a week night so we could all go and watch the Colne Grand Prix. Having the seven week old Elsie ‘stay up’ until 9:30 is a bit of a habit for said small person – so not an issue.

I’ve had such fun at this race in the past (2007 | 2006 | 2005) and it always seems to have been in great weather – but true to form, last night’s event was held in pretty rubbish conditions. We stayed dry – just – but it was cold and the rain before the event had kept away the hoards of locals who normally turn out to watch the event. See the pics here on Flickr.

My Team Wheelbase team mates Lewis and Stuart were riding, and it was great to go and lend a bit of support. In the end, it didn’t work out for either of them (though Stuart’s 25th was very respectable)… tough Elite field, valiant efforts and all that. Lily’s turning into a bit of a partisan, cheering for all the Wheelbase riders, including Rob Jebb at one point, who wasn’t even there!