Having a birthday in the depths of January isn’t that good. At the butt-end of Christmas when schools have gone back and the daylight lasts about as long as dinner time, no-one feels like anything other than thinks like diets, holidays, or ending it all. When I turned 40 this January I kept it a low key affair. Not because I didn’t want to get lots of people together, but more because I didn’t want anyone to be doing it under duress.

It started with a bike

One year ago, I took a short but wonderful summer’s bike ride through Barbondale, Dentdale and Kingsdale (higher than any Lakeland pass, don’t you know?) and chanced upon the most wonderful summer festival – the Dentdale Music and Beer festival. Three very good things… so my immediate reaction was to promise myself that we should go to it in 2010, and in a flash of genius (short-lived), I thought I could use my 40th as leverage to get a few close friends and family to come along. 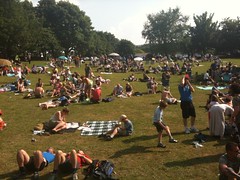 A year goes by, as they do at an ever-increasing pace, and we’re there (minus Dippy and the girls because of a work disaster). Katie, Phil, Anne, Sally, Simon, Matthew, Holly, Rach, Jon, Dave, Jane, Katie and I plus nephews Matthew and Angus. Our own little tent city in the middle of an unbelievably summer-like scene in a gorgeous valley. With music. And beer. And a wonderful bespoke poster courtesy of Simon

There’s not really any need to go into the ins and outs of what went on. What middle-aged people like us do for entertainment follows a fairly simple pattern. There was obviously a lot of drinking and talking and laughing, but also just simple moments to enjoy seeing people all together who we normally see in ones and twos. Old times. Great.

The festival itself was a well-pitched and well organised affair. They kept it low key but tidily arranged and the feeling was predictably friendly. The music was rootsy and folky, but at times surprising, and even gobsmackingly good in the case of Manchester’s 4square, whose musicianship was jaw-droppingly good for such a seemingly youthful band.

Sunday’s hangover was probably not as bad as could have been expected. The lovely weather helped pump vitamin D in through the skin cells and I’m sure that helped a bit. It was (nephew) Matthew’s tenth birthday in the morning too, so a bit of a bonus to be round for that.

Would really like to make this a regular fixture. Would certainly recommend it to anyone who likes music, beer, or Dentdale.