Fantastic 24 hours camping at the Deershed Festival over near Thirsk this weekend. Sandwiched between rain on Friday and Sunday, we managed to enjoy a pretty sunny day of musing and moseying to music and general arts.

With Elsie just over two, we thought it was time to brave the family festival idea (hats off to Sally and Si, doing it with 11 month old Hugh), and the experiemtn worked out really well. Managed to see pretty much all the music we wanted to see without any impact on the enjoyment of the girls (though Lily’s ears may not recover from The Wedding Present’s PA being about 2 metres from her for two songs.

Wonderful fate thing in having my two fave bands (or almost) in one place for the first time I’ve seen it. The Weddoes and The Wonder Stuff pretty much did it for me for most of my student days and far beyond, so having Miles Hunt and Stuffies’ violinist Erica Nockalls performing a great acoustic set on one stage followed by The Wedding Present on the main stage was blissfull.

I wear my heart on my sleeve most of the time with music, and they still do it for me now. Spine tingling in subtle ways that other people wouldn’t get, but it was the added ingredient of having my girls there that did it for me. Elsie took a power nap in my arms for 20 mins standing 6 feet away from Miles Hunt, loud PA and all. Just amazed me. Lily was flagging after a day of full on 7 year old engagement will all the childrens to-do things at the family oriented festival… but somehow kept closely engaged with the music when we were.

Katie spotted David Gedge wandering about as he always seems to do before gigs, and asked him for an autograph which was very sweet. Following a Tweet to me from the man himself last Friday I’m feeling very swoonful. 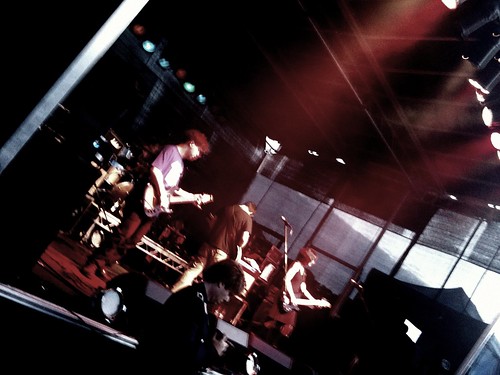 Elsie rallied for the Wedding Present. Dancing on my shoulders as the sun set, matched by Lily’s near delerium on the same (flagging) shoulders when DLG struck up the first notes of Kennedy. “She’s seven”, I thought. “Cool”.

Lovely to spend a bit more time with Sally and Simon, too. A bunch of their local camping friends came along too; so lovely to have another unit of tents.

Heartily recommend the festival for anyone wanting to toe the water of this type of thing with children in tow.