Weird little anniversary that snuck up in my mind (a mind that’s good at remembering things it doesn’t need, but forgets the important stuff). 31 years ago today (6th December 1987) I, along with my friends Marcus Gaskell and Henry (now John) Kirkup, to an ace little recording studio, to make some music. END_OF_DOCUMENT_TOKEN_TO_BE_REPLACED

Fantastic 24 hours camping at the Deershed Festival over near Thirsk this weekend. Sandwiched between rain on Friday and Sunday, we managed to enjoy a pretty sunny day of musing and moseying to music and general arts. END_OF_DOCUMENT_TOKEN_TO_BE_REPLACED

“Five years in the making” makes any album sound epic, doesn’t it. Merchandise are a friend-of-a-friend band that have become just a friend band now. Brad asked me to build the Cityscape Records website some time back, then I shortly after rebuilt the Merchandise website. Along the way I got to listen to their music and things grew and grew. I do enjoy their poppyness lots…

I’m lucky enough to be – in some sort of VIP way- in receipt of a pre-release of the album ‘For the Masses’ that will be coming out in June, and thought I’d tell you all that it is well worth the wait.

Putting two fairly anthem-like tunes up fron in positions 1 and 2 (‘Listen Up’ and ‘Sometimes’) is a smart move. You start buzzing straight away. Still getting used to some of the new tracks but all satisfy in their own way. ‘Prescription’ and ‘Enemy’ are certainly not the happy-go-lucky type of track that the beautiful ‘sometimes’ proves to be listen after listen. 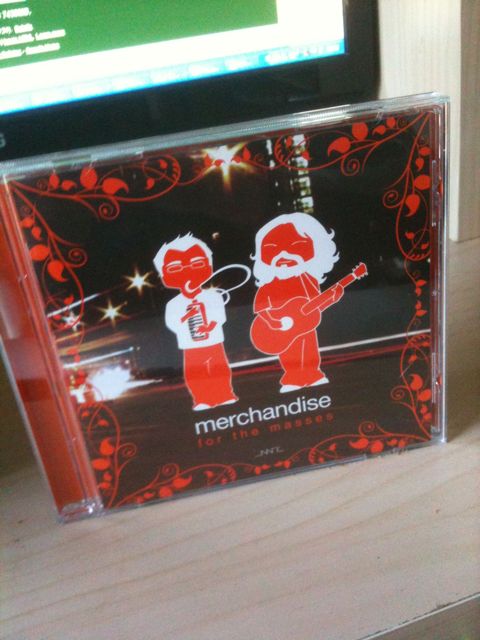 The little baby that my sister in law Fiona and her husband Graeme had in 1991 – not very much further back than yesterday, it feels, is 18. Like millions of others before me, the coming of age of a close relative has really brought home to me how quickly time flies and how there is bugger all we can do about it. I think the traditional solution is to ‘party’ – if that’s acceptable as a verb [I did use an inverted comma]. END_OF_DOCUMENT_TOKEN_TO_BE_REPLACED

Danny MacAskill’s rise to fame has been rapid this year due to some great viral stuff involving his Edinburgh street exploits on youtube. Top tune, too… END_OF_DOCUMENT_TOKEN_TO_BE_REPLACED

Merchandise‘s new single arrived with me yesterday and seeing the cover, that familiar toon style of illustration and the brown/orange thang is really starting to stamp the Merchandise brand on all that they do. END_OF_DOCUMENT_TOKEN_TO_BE_REPLACED

Had a nice teatime chill with Lily and Elsie last night whilst Katie went out tot he gym for the first time since Elsie was born… including some freeform art dance by Lily, totally unprompted, to my favourite album of all time. END_OF_DOCUMENT_TOKEN_TO_BE_REPLACED

Bolton friends and wonderful pop band Merchandise have just ‘released’ my remix of their track ‘Glitterati’ on their website.

The remix was an interesting experiment in cutting things back to the core; the original vocals by Brad Wood are used from the track but nothing else and I decided an orchestral arrangement would go well with the reflective mood of the track. The idea behind this was also inspired by Cinerama’s ‘Airborne’ which featured David Gedge’s vocals directly on top of Cello and not much else. It’s something about the subtle but definitely northern dialect that lends itself to this and something that Brad shares with Gedge.

Listen (for a limited time only!) to my remix on Merchandise’s website here: Glitterati (Minnellium Mix). The remix will also go out on CD as a B Side to a single in the new year.

This doesn’t come easy. I’m not a mainstream person. Well, I am, really – that’s what all this is about, but I don’t occupy the middle ground that easily still. I’m 38 and it’s getting so much easier. My love of the Carpenters and Doris Day will be confessed openly soon (and if you think I’m joking, Stop, wait a minute Mr Postman and Move Over Darling).

One thing that’s never been on there is FGat Boy Slim’s “You’ve Come a Long Way Baby” album from 1998. I never got round to burning it as Katie and I (and th near neighbours of our house in Gloucester Road, Cheltenham) had played it seemingly to death in 1998.

However, a bit of an audio audit has rekindled the flame that played it to death in the first place. Despite being a mainstream radio staple, The Rockafeller Skank is just a plain old killer and summarises the era. Chapeau, Quentin.

Quite the most delightful bit of animation that I think I’ve seen since Pixar’s ‘Robots’ – this appeals to me on so many levels; the epitome of how alive sequenced, electronic music can be if you just use your imagination. Wonderful… ten out of ten.

I’m not going to attempt a well written review of a gig here, I’ve got too much bias with a band that I’ve loved to follow, (pretty fervently for c. 21 years) to do a good, balanced review, but it’s nice to capture my thoughts on last night’s performance whilst fresh in my head.

TWP have never shied from gimmickry (12 singles in a year, for example, back in the 90s), and somehow they decided to take to the road to mark the 20th anniversary of their defining album, “George Best”. Great idea really; whole album, start to finish, in the right order. Like a dream gig in many ways for me.

To add to it all, the ten or so songs that they chose to sandwich George Best with were a well picked balance from the massive repertoire. ‘Blonde’ to come on to stage one-by-one, for example and a very well chosen ‘Kennedy’ to pick things up immediately after the George Best tracks.

I took a few snaps on my phone but they were so poor so I had a play in photoshop – the lovely thing about gigs is the colour lights….