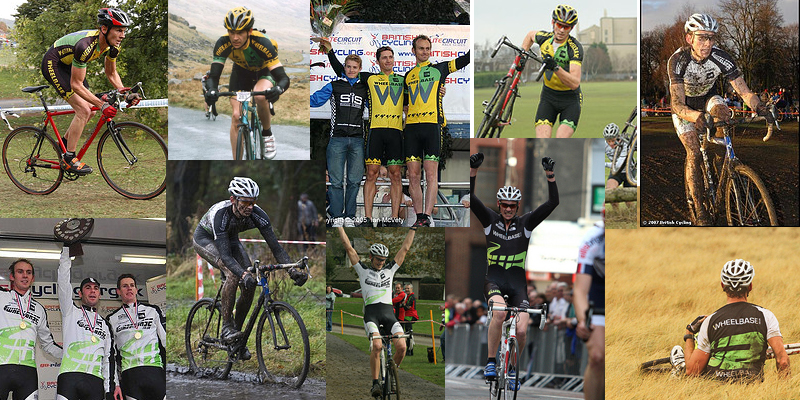 I joined Team Wheelbase in 2005 and will be racing for another team very soon (more on that will follow shortly). It’s the strangest feeling to move on from wearing the black and green kit – there have been some amazing highlights in the last few years and I just wanted to reflect a little.

Basically, when I moved up to the north west again after living in Gloucestershire for ten years, I wanted a break from cycling clubs. I had worked pretty hard at times as a race organiser for a race secretary – as well as a bit of a domestique in road races (translation: I didn’t really get enough results so rode on the front a bit too much instead.) I moved here and said that I wasn’t going to join any club or team – but started to get into the top 5 in some local cyclocross races and suddenly felt like being part of things a bit more.

I joined the then “Wheelbase / Ron Hill” team in autumn 2005 and had to pinch myself riding alongside 3 peaks hero Rob Jebb as well as two team mates who have turned into real chums – Lewis Craven and Stuart Reid. I was the bottom of the pile but being part of a big name really motivated me. Some personal highlights that followed in the following years in my Wheelbase kit:

Those are things that really stand out as highs but where I will miss things most is the craic – the banter – smalltalk, the overnighters in Premier Inn with three lads whining about how tomorrow’s race will be stuffed if they eat the wrong toast at breakfast… those are the things that made this a rounded, enjoyable experience.
Finally, Thank You to Toby, Billy, Matt and the other people who jetwashed my bikes whilst I waltzed round in the mud like a prima donna.