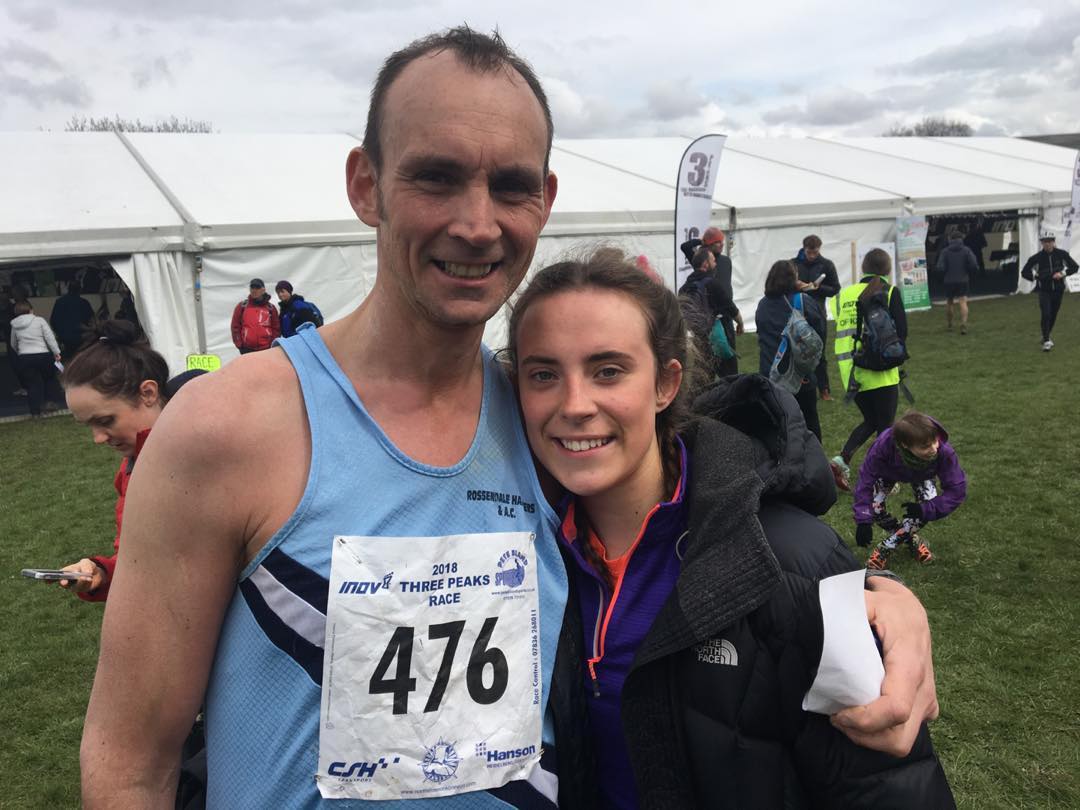 I really enjoyed the 2018 3 Peaks fell race. I took a ten year gap following a ‘never again‘ moment in 2007 after my second finish. Both had been respectable finishes under 4 hours and I’d have been happy to put the pain of that race behind me and leave it to gently subside. But a revived / rekindled interest in fell running (as I took Lily and Elsie to the Rossendale Harriers over the last ten years or so) left me realising that I just needed to man up and do it. Everything hurts. Nothing to prove – just go out there and take on those ace hills!

So last year I entered the race again and somehow really enjoyed the 2017 race. It became something perhaps more suited to my maturity and I had realised that longer races were far more an exercise in restraint and pacing than they were in out-and-out fitness.

This year, I still felt like I went out a bit too fast but nowhere near as fast as in 2007. It’s hard, because you get sucked along by the pace of Penyghent. Despite the climb, it comes when you have fresh legs and lots of energy. It actually takes quite a bit of resolve to not go too fast.

I had expected to have been quite a bit slower this year. After 3hrs 49 in 2017 I have been relatively bumbling along in races this year. A few longer term niggles and back issues meant I haven’t really felt like pushing on that fast. So I promised to listen to my body carefully and not look at the watch until the summit of Whernside 13 miles into the 23.5 mile race.

It was a great experiment. My only permitted screen on the watch was the Heart Rate, and I kept checking that it wasn’t creeping too high. It’s so tempting in a massive field (c.750 runners) to pick a pair of heels and make yourself stick to them. But that’s where it can get messy and I had to pay attention to my own capabilities.

When I did eventually look at the checkpoint time on my watch at the summit of Whernside, I was pretty much there or thereabouts – only 3 mins down on 2017. More significantly, I didn’t feel absolutely crucified, and knew I had plenty more steady running left in me.

I remained fairly steady down Whernside. You an tend to get into cramp territory after two hours at that sort of pace. I must admit it wasn’t hard to ease off a bit – it was a joy to! The descent has got harder this year – they forced you to take the steps all the way down with carefully flagged and taped areas, and not the easier-on-the-legs grassy trods to the side of the hard steppy path. By the time I got to Chapel le Dale / Hill Inn with still 7 miles (and one Ingleborough) to go I had kind of deliberately lost another minute on my 2017 schedule with some mincing down carefully.

But this is when things started to really improve. Maybe not in terms of speed that much, but seeing Family-galore after the Hill Inn checkpoint (Katie, Mum, Jean, Lily, Elsie, Phil, Anne, Matt, Angus, Helen) and some other friends was great for morale.

I’d pre-arranged for Lily to run along the last 7 miles over Ingleborough to Horton. I had no doubt she was up to it and easily sensible enough not to interfere with other runners. But that somehow boosted me massively. Whilst we spoke little (needs must) the companionship was immense.

I made up the most time / places of all the splits on the ascent of Ingleborough, gaining 9 places and running this stretch 3 minutes faster than last year. I was clearly whacked but still within myself / able to sustain a pace. But most of all, I was just feeling a light relief and very relaxed. Running with Lily was cheering me up, no end.

We made our way along the seemingly endless descent. This has claimed many a runner’s dream over the years, mine included. It can be such a killer. It’s never straightforward under foot. Constantly changing and relentlessly challenging on tired legs unwilling to raise themselves. If you even needed a spring in your step, it’s here. But there is no spring to be sprung after running that far in my shoddy old legs, and so it turns into a massive exercise in concentration. Slipping and tripping is one thing, but it compounds if you do, because your legs immediately cramp with every stumble.

Speaking of which, when things got really slippy on the polished but mud-caked limestone pavement of Sulber Nick, I’d asked Lily (behind me at that point on the narrower track) if she was okay. She’s said “yeah, but I face-planted back there and smacked me knee”. She seemed fine and I hadn’t even known about it.

I approached the finish in what looked pretty much like the same time as last year. In fact, I’d happily come in in 3hrs 50. Happy with that and much better than I’d expected.

As things turned out, Lily’s invisible slip behind me had actually knocked her harder than we both thought. When she stopped (having diverted around the racers’ finish), blood poured quite willingly from her knee. She was straight into the first aid tent. Took the sheen off the finish for us both! Poor thing. She’s hard as nails though and took everything in her stride.

#3pcx legends at the other #threepeaks race today

Father and daughter, brother and niece, call them what you like but they’re #family #fellrunners

Thanks as usual to all those who helped out and encouraged – a lovely day.