Weird little anniversary that snuck up in my mind (a mind that’s good at remembering things it doesn’t need, but forgets the important stuff). 31 years ago today (6th December 1987) I, along with my friends Marcus Gaskell and Henry (now John) Kirkup, to an ace little recording studio, to make some music.

We were in a band at school and somehow, where it is relatively easy for bands to record themselves these days, we had the bright idea of paying money to get our all-important self-written songs down for the world to hear.

I remember it cost a quite a bit back then. The Linden Studios – a wonderful remote retreat looking from just outside Shap onto the eastern Lakes fells, was a real treat for us and didn’t come cheap. But recording the two songs (Happiness and More than you ask for) was worth every penny. It made our spines tingle to hear it. It made our mates think we were ace. Tapes got copied around. It was a strange adventure but a wonderful thing to do for three 17 year-old lads.

We were helped too by a music teacher who took us under his wing. As far as I can remember, none of us studied music, but Mr Hamilton got a bit of a kick out of some buzz around music at the school like this. I kind of know where he’s coming from. Radio Cumbria interviewed us. We were in the paper. We got to the regional finals of the TSB ‘RockSchool’ competition and turned up in Bolton the only band who weren’t allowed by school to bring a coach load of their own fans (on a school day!)
Before Instagram, that was as near to NME as you could get.

The day was spent, as many of my memorable days are, with my brother Phil who I’m sure found it equally exciting, and who supplied the Harmonica solo on Happiness too.

Looking back now, it all sounds so dated. There was some ace music about, but this wasn’t really it. I know that, I’m not daft. But at the time, it just felt ace. 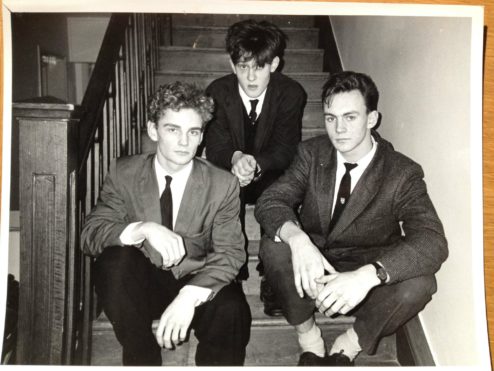